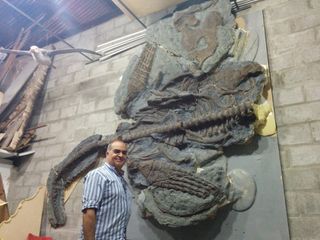 Fernando Novas, a paleontologist at the Bernardino Rivadavia Natural Sciences Museum in Buenos Aires, stands next to a full-size cast of the plesiosaur he and his colleagues excavated in Patagonia.
(Image: © Hernán Seoane)

Grapefruit-size vertebra and robust rib bones come into view in irregular chunks of sandstone as paleontologist Fernando Novas uses a hammer and chisel to chip away at what may be one of the largest and most complete skeletons of a long-necked marine reptile called a plesiosaur.

The beast would've swum using enormous flippers in the waters, covering what is now Patagonia, some 65 million years ago, Novas and his colleagues have found.

Paleontologists are still carefully removing the hard sandstone surrounding the plesiosaur's skeleton, but they expect the newfound marine reptile will be a previously unknown genus and species, said project leader Novas, a paleontologist at the Bernardino Rivadavia Natural Sciences Museum in Buenos Aires, Argentina. [See photos of the Patagonian plesiosaur]

Novas showed the plesiosaur to a Live Science reporter visiting Argentina in November. Its four flippers each measure more than 4 feet (130 centimeters) long and its entire body would've extended about 23 feet (7 meters) when alive.

"The tail is emerging very well," Novas said, gesturing at his progress. Even though the bones are still encased in rock, the finding is the most complete and articulated (meaning the bones aren't scattered, but sit in the correct position) plesiosaur on record, Novas said.

The plesiosaur lived during the Late Cretaceous, about "30 minutes before the fall of the asteroid," he said, jokingly. It lay buried in the sandstone for tens of millions of years, until Novas followed up on a tip, which led to him and his colleagues excavating the creature in 2009.

It all started when Rowan University paleontologist Kenneth Lacovara, who spent years in Patagonia excavating Dreadnoughtus, the most complete super-massive dinosaur known to scientists, heard that there were fossils near the shore of Argentino Lake, in the Patagonian province of Santa Cruz. Lacovara visited the fossils, but didn't have time to lead an excavation. Instead, Lacovara told Novas about the tip later over coffee, encouraging his friend to excavate the bones.

By happenstance, tour guides in El Califate, a city next to Argentino Lake, had invited Novas to speak to them about geology and paleontology. He flew from Buenos Aires to El Califate, and after the lesson asked them about the fossils in the lake.

"They said, 'Yes, we know about that. We can go tomorrow,'" Novas recalled.

The next day, they went to the lake's edge. Part of a single flipper and a section of tail were visible beneath the water. Novas called his colleague at the museum, paleontologist Marcelo Isasi, who promised to help excavate the fossils, even if he had to wear a scuba suit.

After getting permission from the landowner, Gerardo Povazsán, a small group of paleontologists got to work, excavating the skeleton in October 2009. The crew made a fort around the skeleton, placing a circular perimeter of sand bags around the creature and then pumping out the water. The whole time, lapping waves flooded the enclosure, but the scientists used buckets and a pump to drain it countless times, Novas said.

It was only a matter of luck that nobody was electrocuted while using the electric hammer to remove the rock containing the fossils from the wet and rocky fort. [Image Gallery: Ancient Monsters of the Sea]

"Anyway, we are all alive," Novas said.

With the help of a donated bulldozer, they loaded the fossils into a donated truck and transported them north to Buenos Aires.

They're still excavating the fossils in the lab, but the researchers have already uncovered an intriguing fact: The plesiosaur has a long neck.

Once they fully excavate the bones, the researchers plan to describe the new species and then compare its anatomy to other plesiosaurs, so they can create a family tree, called a phylogeny, for the reptiles. (Plesiosaurs are reptiles ─ the name means "near lizard" ─ but they are not dinosaurs.)

"I hope the preservation of the skeleton will let us better know the anatomy of these reptiles, and shed light on the phylogenic relationships of the southern plesiosaurs," Novas said.