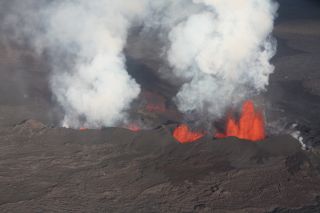 An eruption at Iceland's Holuhraun lava field, fed directly from the Iceland mantle plume. Plume water from Baffin Island that was measured for the study was trapped inside rocks.
(Image: © Magnús Tumi Guðmundsson)

Earth is the only planet in the solar system that boasts a surface abundantly covered with liquid water. But where that water came from is a long-standing question that scientists are still unraveling.

A new study reports the first evidence that ancient dust saturated with water collected at the heart of an infant Earth.

Around 4.6 billion years ago, Earth formed from countless collisions of dust and rocks around the sun. Planetary scientists at the University of Hawaii questioned whether some of the ancient minerals lurking in the deep mantle — 1,800 miles (2,900 kilometers) below Earth’s surface — might have held the planet's first water molecules. And lava sampled in 1985 from Baffin Island in the Canadian Arctic originated from just the right depth to provide answers. [Photo Timeline: How the Earth Formed]

Why was depth so important? "We needed an undisturbed source of mantle from the Earth’s formation," Lydia Hallis, lead author of the study and a planetary scientist with the University of Glasgow in the United Kingdom, told Live Science. Earth's surface has altered dramatically over billions of years, but lava churning in the deep mantle remains unchanged from when the planet took shape.

Hallis said lava samples had to come from deep in the mantle because lava closer to the crust may have erupted and mixed with surface matter. In the search for primordial water, Hallis and her colleagues had to be sure that the minerals they analyzed dated back to Earth’s earliest days, with no contamination from younger rocks.

And finding lava samples in this pristine condition was challenging, to say the least. "Hydrogen is everywhere on Earth!" Hallis said and laughed. "It's difficult to tell if what you're measuring isn't hydrogen from contamination. You're measuring parts per million in a piece of rock so small you can't see it. It took years to get to the point where we knew we were measuring something real, not water from the surface," she said.

Once the scientists had their deep-mantle lava, they could study traces of undisturbed ancient water in basalt, lava's cooled form. The key to detecting where Earth's water came from lurks in its hydrogen atoms; specifically, in the ratio between two types of hydrogen atoms, called isotopes. Isotopes are identical, except for one key difference: the number of neutrons. One hydrogen isotope — deuterium — has one neutron, while another — hydrogen — has none.

Comparing the number of zero-neutron atoms relative to one-neutron atoms in water's H2O molecules yields a ratio that is unique to every planet — and even asteroids and comets — in our solar system. Typically, planets closer to the sun have more of the hydrogen isotope overall in their water molecules, while planets farther from the sun have more of the deuterium isotope, Hallis explained.

Earlier studies of Earth's surface water, however, found ratios that favored deuterium. This fueled theories that Earth's water was brought to the planet after it formed, by water-rich asteroids or comets. Delivery of Earth's water by these solar system outliers could explain a higher ratio of deuterium.

But the new study found water traces that told a different story. Dust grains hidden deep inside our planet for billions of years showed more hydrogen isotopes in their water, suggesting that water-saturated dust embedded itself in the rocky clumps that eventually took shape as Earth, the researchers said.

"This changes everything," Steve Desch, an astrophysicist and professor in the School of Earth and Space Exploration at Arizona State University, who was not involved in the study, told Live Science. "The debate about the origins of Earth's water has centered for decades on whether Earth got its water from comets or chondrites (rocky meteorites)," he said. This study suggests that dust and gas around the sun was an important contributor as well, calling for re-evaluation of earlier conclusions that overlooked the role of material within the so-called solar nebula.

Desch added that the study could also have far-reaching implications for deciphering where water came from — and how it was lost over time — on other planets in the solar system, and even on planets orbiting distant stars.

"This is a big result.  A new chapter has just begun in our understanding of where Earth-like planets get their water," Desch said.

The finding is detailed today (Nov. 12) in the journal Science.