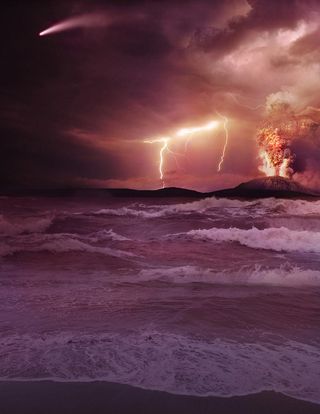 An artistic concept of an early Earth.
(Image: © NASA/JPL-Caltech)

Life may have emerged on Earth 4.1 billion years ago, much earlier than scientists had thought, and relatively soon after the planet formed, researchers say.

If life on Earth did spring up relatively quickly, that suggests life could be abundant in the universe, scientists added.

"The faster life arises on Earth, the more varied and possibly extreme are the conditions in which it can do so elsewhere and be sustained," study co-author Mark Harrison, a geochemist at the University of California, Los Angeles, told Live Science. [7 Wild Theories for the Origin of Life on Earth]

The researchers analyzed more than 10,000 zircons that originally formed from molten rock in what is now western Australia. Zircons are heavy, durable minerals related to the cubic zirconia used as imitation diamonds. As zircons form, they can capture and preserve materials in their immediate environment, serving as time capsules. (A tiny zircon crystal found in Australia's Jack Hills is considered Earth's oldest-known rock fragment, dating back about 4.4 billion years.)

In the new study, the scientists identified 656 zircons containing dark specks. They focused on 79 whose appearance suggested they might contain graphite, which is made of pure carbon, the key component of life on Earth. Life often prefers certain isotopes of carbon, so analyzing carbon isotope levels in ancient graphite could give insights into whether life was alive then. (Isotopes are atoms of an element with varying numbers of neutrons.)

The researchers found graphite in just one of the 79 zircons. "It was nerve-wracking to manipulate the sole tiny zircon fragment — about half the width of a hair on your head — containing the graphite inclusions," Harrison said.

The ratio of uranium-to-lead isotopes in the zircon suggests it is 4.1 billion years old. "Twenty years ago, this would have been heretical; finding evidence of life 3.8 billion years ago was shocking," Harrison said in a statement.

The carbon within the zircon has a high ratio of carbon-12 to carbon-13. That ratio suggests a biological origin for this carbon, likely the result of life-forms that photosynthesize, using the sun's energy to turn carbon dioxide into sugars.

"Life on Earth may have started almost instantaneously," Harrison said in the statement. "With the right ingredients, life seems to form very quickly."

Scientists had long believed the early Earth was dry and desolate. These new findings suggest otherwise.

"Our view of the first many hundreds of million years of Earth history as a roiling, lifeless and continent-free world was actually based on zero observational evidence," Harrison said.

The new finding suggests that life existed before the Late Heavy Bombardment, the catastrophic series of cosmic impacts the inner solar system experienced that formed the moon's giant craters about 3.9 billion years ago.

"If all life on Earth died during this bombardment, which some scientists have argued, then life must have restarted quickly," study co-author Patrick Boehnke, at UCLA, said in the statement.

The researchers are relatively confident in their interpretation of the graphite within the ancient zircon. "Nobody has offered a plausible alternative explanation for graphite of non-biological origin into a zircon," Harrison said in the statement.

Even so, in the future they would like to analyze 1,000 ancient carbon-bearing zircons, Harrison said. Harrison, Boehnke and study lead author Elizabeth Bell, also at UCLA, detailed their findings online Oct. 19 in the journal Proceedings of the National Academy of Sciences.