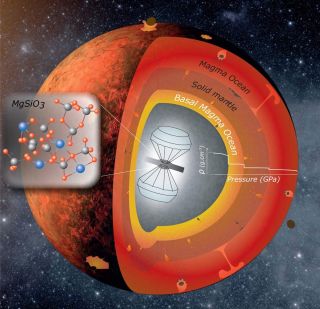 As far back as 4.5 billion years ago, a dense magma ocean may have formed at the top of Earth's core.
(Image: © @sylvain Petitgirard/ Bayreuth University)

An ancient ocean of magma once existed on top of Earth's core, new experiments suggest.

Previous calculations suggested a giant ocean of magma, or molten rock, might have existed in the lowermost part of Earth's mantle layer between the core and crust from very early in our planet's history, from about 4.5 billion years ago to at least about 2.5 billion years ago. However, scientists had not confirmed these models with experiments. [In Photos: Watery Ocean Hidden Beneath Earth's Surface]

New X-rays of rocks suggest that remnants of this ancient magma ocean exist deep within the Earth.

The scientists used the most brilliant X-ray beams on Earth, which are generated at the European Synchrotron Radiation Facility in Grenoble, France. The researchers focused on bridgmanite, the most abundant mineral in the deep Earth, where it exist in solidform.

Bridgmanite is made of magnesium, silicon and oxygen atoms ordered into crystalline structures. When this mineral melts, forming what is known as a magnesium-silicate melt, its atoms are arranged in disorderly structures. The scientists reasoned that the amorphous structure of a magnesium-silicate melt could make it denser than bridgmanite, causing the molten rock to sink into the lowermost parts in the mantle right next to the Earth's core.

The scientists used X-rays to measure the density of amorphous magnesium silicate at extreme pressures equivalent to 135 gigapascals, the kind of pressures found 1,800 miles (2,900 kilometers) below Earth's surface in the deepest part of the lower mantle. They experimented on magnesium- silicate glass, the room temperature equivalent of a magnesium-silicate melt, squeezing a sample about as thick as a hair between two diamonds, said study lead author Sylvain Petitgirard, a geophysicist at the University of Bayreuth in Germany.

The scientists found that pure amorphous magnesium silicate is nearly as dense as crystalline bridgmanite. It would likely be even denser, however, deep in Earth where iron would chemically combine with the magnesium-silicate melts; the resulting combination would result in a dense magma that could sink to the bottom of the mantle and collect above the Earth's core.

An ancient magma ocean could have concentrated a number of elements nearthe core, especially radioactive ones such as uranium and thorium, and signs of such an ancient reservoir are seen in rocks from Hawaii, Petitgirard said. Furthermore, seismic waves also reveal dense regions at the base of the Earth's mantle, as well as potential pockets of magma.

"A basal magma ocean would be an ideal candidate to explain both features," Petitgirard told Live Science.

Future research can use powerful X-rays to analyze minerals with a greater variety of compositions and learn more about the deep Earth. "There is really a lot of work to do to understand our planet," Petitgirard said.

The scientists detailed their findings online Nov. 2 in the journal Proceedings of the National Academy of Sciences.