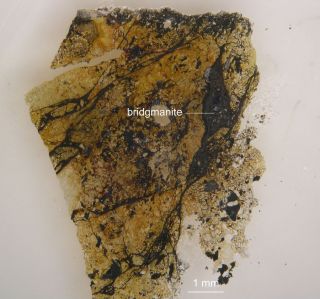 The elusive mineral bridgmanite is shown in a shock melt vein inside a 4.5-billion-year-old meteorite found in Queensland, Australia.
(Image: © Chi Ma)

Earth's most abundant mineral lies deep in the planet's interior, sealed off from human eyes. Now, scientists for the first time have gotten a glimpse of the material in nature, enclosed inside a 4.5-billion-year-old meteorite. The result: They have characterized and named the elusive mineral.

The new official name, bridgmanite, was approved for the mineral formerly known by its chemical components and crystal structure — silicate-perovskite. The magnesium-silicate mineral was named after Percy Bridgman, a 1946 Nobel Prize-winning physicist, according to the American Geophysical Union blog.

"It is a very exciting discovery," Chi Ma of Caltech and Oliver Tschauner, of the University of Nevada, Las Vegas, told Live Science in an email. "We finally tracked down natural silicate-perovskite (now bridgmanite) in a meteorite after a five-year investigation, and got to name the most abundant mineral on Earth. How cool is that?" [Shine On: Photos of Dazzling Mineral Specimens]

The mineral likely resides beneath Earth's surface in an area called the lower mantle, between the transition zone in the mantle and the core-mantle boundary, or between the depths of416 and 1,802 miles (670 and 2,900 kilometers), scientists said.

Scientists have been searching for the mineral for a long time, because in order to identify a mineral one must know its chemical composition and crystal structure, Ma said.

Researchers found the bridgmanite in a meteorite that had fallen to Earth near the Tenham station in western Queensland, Australia, in 1879. The meteorite, Ma said, is highly shocked, meaning it endured high temperatures and pressures as it slammed into other rocks in space. Those impacts can create shock veins of minerals within the meteorites.

"Scientists have identified high-pressure minerals in its shock-melt veins since 1960s. Now we have identified bridgmanite," Tschauner said, referring to the Tenham meteorite. The meteorite is considered a chondrite, the most common type of meteorite found on Earth; scientists think these meteorites are remnants shed from the original building blocks of planets.

Most meteors (which are called meteorites once they strike Earth) are fragments of asteroids, while others are the cosmic dust discarded by comets. Rarely, meteorites represent impact debris from the moon and from Mars.

After five years of work, including multiple experiments, Ma and Tschauner sent their data for review to the International Mineralogical Association's Commission on New Minerals, Nomenclature and Classification (CNMNC), according to the AGU blog. The commission approved the mineral and new name on June 2.

Editor's Note: This article was updated to reflect quotes by both scientists Ma and Tschauner.