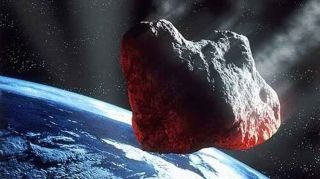 An artist's illustration of a large asteroid headed for Earth.
(Image: © ESA.)

Earth got most of its water from asteroid impacts nearly 4.6 billion years ago, shortly after the solar system first took shape, a new study suggests.

Researchers studying a meteorite that fell to Earth in 2000 found evidence that the water in its parent asteroid disappeared soon after the space rock formed, when its insides were still warm. Asteroids that slammed into Earth several hundred million years after the solar system's birth were thus probably relatively dry, scientists said.

"So, our results suggest that the water [was] supplied to Earth in the period when planets formed rather than the period of late heavy bombardment from 4.1 billion years to 3.8 billion years ago," study lead author Yuki Kimura, of Tohoku University in Japan, told LiveScience via email. [Photos: Asteroids in Deep Space]

Kimura and his colleagues analyzed the Tagish Lake meteorite, which landed in Canada's Yukon Territory in January 2000. Scientists think this rock — a type of meteorite known as a carbonaceous chondrite — is a piece of an asteroid that originated in the main belt between Mars and Jupiter.

The scientists used a transmission electron microscrope to observe tiny particles of magnetite, which arranged themselves within the meteorite into three-dimensional "colloidal crystals."

These crystals can be formed during the sublimation of water — the transition of the material directly from ice to vapor — but not during freezing, Kimura said. This implies that the parent asteroid's bulk water disappeared in the early stages of the solar system's formation, before the space rock's innards had a chance to cool down, he added.

Other studies have also found support for very early water delivery to Earth. For example, a paper published this May in the journal Science found that water on the moon and Earth come from the same source.

The simplest explanation for this latter observation, researchers say, is that Earth was already wet by about 4.5 billion years ago, when a planet-size body is believed to have smashed into our planet, ejecting a huge amount of debris that eventually coalesced into the moon.

In addition to water, impacts likely delivered to the young Earth organic molecules — the carbon-containing building blocks of life as we know it. Indeed, the colloidal crystals in the Tagish Lake meteorite have an organic layer on their surface, Kimura said.

"Further analysis might give us some information about evolution of organic molecules in the early solar system," he said.