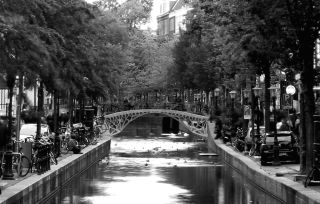 An artist's depiction of what the finished 3D printed bridge might look like.
(Image: © Joris Laarman Lab/Adriaan de Groot/MX3D)

The quaint, cobblestoned city of Amsterdam is about to get a modern addition: a 3D-printed footbridge.

The canal-spanning bridge, which is on track to be completed by 2017, is the brainchild of MX3D, a tech startup based in the Dutch capital. The bridge will be constructed entirely by robots that can "print" complex steel objects in midair. The autonomous bots are like mechanical, torch-wielding welders that melt together layer upon layer of steel to form a solid object, said Tim Geurtjens, MX3D's co-founder and chief technology officer.

It's the first time that Geurtjens and his colleagues are designing and building a bridge using this printing technology. Until now, the company was mainly using its robots to build free-form sculptures and giant pieces of furniture. But the bridge project —a collaboration between the startup, several larger companies and the Amsterdam City Council — is a chance for MX3D to show that its version of 3D printing is extraordinarily useful for making all kinds of things in the real world. [The 10 Weirdest Things Created by 3D Printing]

"With a lot of techniques you're building something inside a printing volume [or container], and then when the object is done you take it out and place it somewhere," Geurtjens told Live Science. Companies like MakerBot and Formlabs, which make desktop 3D printers, have popularized such techniques in recent years.

But MX3D's robots aren't anything like desktop 3D printers. The bots look like giant mechanical arms that end in a torchlike apparatus. Instead of printing objects inside a box, the bots build things out in the open. Their welding torches melt a layer of steel and then cover that layer with more molten steel, which comes from a piece of wire that is melted as it's extruded by the robot.

Unlike most 3D printers that can only extrude materials in three different directions (forward and backward, left to right, up and down), the MX3D robots can print in all directions. The bots turn their torches sideways to print an object that juts out from the middle of a wall, for example. This ability to print in any direction, and at such a large scale, is part of what makes MX3D's technology revolutionary, Maurice Conti, director of strategic innovation at Autodesk, told Live Science.

Autodesk is the California-based software company behind AutoCAD, a computer-aided design software that helps architects and engineers model real-world objects in the digital sphere. The company has been working closely with MX3D to develop software that allows human operators to communicate with the 3D-printing robots more successfully. Autodesk is also allowing MX3D to test out software that optimizes computer designs so that they can easily be created in the real world.

"One of the reasons that I'm so excited about this project is that it's going to be a great demonstration of moving 3D printing into the real physical world and [away from] prototyping and tchotchkes," said Conti, who noted that MX3D's process is breaking down three of the biggest barriers that have kept 3D printing from becoming widespread as a full-scale manufacturing method — size, speed and cost.

The huge printing robots can't build enormous structures (they can only print as far as their arms can extend), but they can create objects that are significantly bigger than those created using other 3D printing methods for metals, like selective laser melting, or SLM. SLM is a 3D printing process first developed in the 1990s. It involves using a laser to melt tiny particles of metal (such as aluminum or titanium) onto a metal base.

The SLM process, which is often used to make parts for airplanes or medical implants, takes place inside a small printing volume, and the parts created are small enough to fit inside a shoebox, Conti said. By contrast, MX3D's bots can build things at the "human scale" or bigger, he added. [7 Cool Uses of 3D Printing in Medicine]

To build the bridge across Amsterdam's Oudezijds Achterburgwal canal, the bots will move along a specially designed track, printing a section of the bridge and then rolling along the track over that new section to print the next section. Because the streets of Amsterdam are so narrow and crowded with pedestrians, the actual printing of the bridge won't take place in the city's red-light district (the structure's future home). Instead, MX3D is building the bridge inside a giant warehouse in the northern part of the city, Geurtjens said.

Geurtjens didn't say how much the bridge would cost, but he did note that MX3D's printing method is a cheaper alternative to SLM.

"If you need really high-quality, very accurate parts, then SLM is the go-to technique. But if you want something really big and affordable, then [SLM] is not really an option," he said.

Traditional welding (the kind in which actual humans use handheld torches to fasten together pieces of steel) is another affordable option for bridge-building, but it's also a much slower process than the one carried out by MX3D's bots. The robots will get the job done anywhere between 10 and 1,000 times faster than traditional metal welders, according to Conti.

That's not to say that iron-working robots are going to "take over the industry," said Geurtjens, who added that MX3D's new technology is no "holy grail" for manufacturing. However, the robots can do the dangerous and dirty parts of a job — the things humans can't (or at least shouldn't) be doing. And that's what makes the company's technology "a big deal," Conti said.

"This is more foundational than a niche technology for a niche problem. I think that’s why this is such a big deal. It can be applied a very broad set of needs," he added.

In the future, you might even see torch-carrying robot arms building bridges for cars or trains. The bots could also be useful at sea, to fix offshore oil rigs, or in space, to repair broken satellites. But for now, Amsterdam is the only place you can see the mechanical welders in action. You can keep tab on MX3D's progress at the company's visitors center (located at the Neveritaweg 15 in Amsterdam), which is open to the public every Friday between noon and 4 p.m. local time.