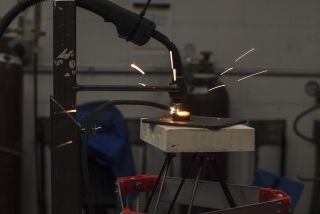 Anyone with access to a welder and the Internet soon could make his or her own replacement parts or tools with a new 3D metal printer that can be built in any garage.

Until recently, most of the 3D printing hype has swirled around plastic 3D printers, which have been used to make everything from clothing to art. And while 3D metal printers do exist, their price tag starts at a half million dollars.

Now, scientists have built an open-source 3D metal printer that costs under $1,200, sharing their design and software with the maker community.

"We have open-sourced the plans," in the hopes of accelerating the technology by allowing others to build upon the design, said project leader Joshua Pearce, a materials engineer at Michigan Technological University in Houghton. [The 10 Weirdest Things Created By 3D Printing]

The snazzy device is modeled after a RepRap (short for "replicating rapid prototype"), a 3D printer that can print most of its own components. The printer uses a metal inert gas (MIG) welder to lay down thin layers of steel, much like plastic printers do, and build complex geometric objects. All of the parts needed to build the metal printer are things one could buy or print using a plastic 3D printer, Pearce told LiveScience.

Pearce envisions the printer being used to make replacement parts for things such as bicycles or to print scientific tools, which could radically reduce the cost of lab equipment, he said.

"I hope to see a large number of small companies starting up to make specialty parts," he said.

Of course, there's always the chance that someone will use the technology to make guns or other weapons. The standard design files are already out there, and Pearce said he's sure someone will make weapons from them.

"Every single technology humanity has ever developed, we have found a way to abuse," he said,

But Pearce said the technology has greater potential to be used for good. In the developing world, for example, the printer could be used to make water pumps or windmill components.

The printer takes about a day to build, and it is inexpensive and simple enough to be built in a garage by someone without much welding experience. But the technology is better suited for use by a small shop business or maker space, because of the safety gear required to operate a welder.

Higher-end metal printers are still much more precise than the one made by Pearce's team. "We are definitely not there yet," Pearce said, but he added that the resolution and speed will only improve with the involvement of the maker community.

The new printer design was detailed Nov. 25 in the journal IEEE Access.