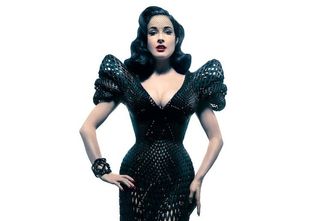 The latest runway fashions aren't made with a sewing machine, but with a printer.

3D printing has been around for decades, but it has just started to weave its way into the world of fashion. A technology once used primarily for prototyping is now spitting out wearable items. Already, 3D printers are used to make jewelry and high-end apparel, and it may not be long before people can print out clothing from the comfort of their living rooms.

In fact, consumers will be printing their own clothing by 2020, according to inventor and futurist Ray Kurzweil. [The 10 Weirdest Things Created By 3D Printing]

In February, burlesque dancer Dita Von Teese made a dramatic entrance at a conference held at the Ace Hotel in New York City, wearing a 3D-printed, black-nylon Swarovski-crystal-studded dress. Designers Francis Bitonti and Michael Schmidt (who has designed outfits for Lady Gaga and Tina Turner) collaborated to create the gown, which was printed by the New York-based company Shapeways.

The dress has almost 3,000 independently movable joints. It looks kind of unreal, Bitonti said. "There's a precision we're not used to encountering in the physical world," he noted.The chainmail design makes the dress very flexible, so it can be put on and taken off as an ordinary dress would. Still, it's not exactly street attire. "You don't wear a chainmail dress out to the grocery store," Bitonti told LiveScience.

To create such a futuristic garment, designers made computer drawings that were fed into a 3D printer, which created the interlocking design by laying down thin layers of nylon powder and fusing them with a laser — a process known as laser sintering. They printed the dress in 12 pieces, which were dyed black and superglued together by hand.

But 3D-printed clothing isn't only for the elite: A company called Continuum Fashion creates customized clothes for the tech-oriented consumer. Continuum created the first 3D-printed bikini, consisting of circular nylon disks connected by small springs. Although cheaper than a crystal-studded dress, the bikinis might still leave their imprint on your wallet. Each bikini is made to order and sold in pieces, totaling about $275.

While 3D-printed clothing is relatively new, the process has been used for years to make accessories, including jewelry, handbags and shoes.

Right now, it still costs more to make apparel with 3D printers than with traditional manufacturing methods. The main barrier to lowering costs is the factory system: The companies that make the 3D printers also make the materials, Bitonti said. But companies like Shapeways have lowered the price significantly. "We're looking at a new industrial revolution," he added.

Even so, could printed clothes be just a fad? Bitonti doesn't think so. "It's definitely not going to be a trendy thing. It's a game changer," he said.