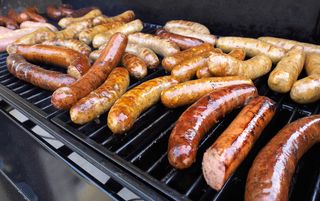 Monday was a rough day for bacon lovers, as well as for fans of hot dogs, sausage and salami. That's when a report by a cancer research group from the World Health Organization announced that there was sufficient evidence from epidemiological studies to show that eating processed meat can cause colorectal cancer in people.

The researchers also classified processed meat as a human carcinogen, or cancer-causing agent.

The news for people who eat steaks and other unprocessed red meat was only slightly better. After reviewing data from more than 800 studies that looked at the link between the consumption of red meat or processed meat and the risk of certain cancers, the panel of 22 scientists categorized red meat as probably causing cancer.

The group also concluded there was strong, but still limited, evidence of an association between eating red meat and colorectal cancer.

In addition, the data showed a connection between eating processed meat and an increased risk of developing stomach cancer, as well as a positive link between red meat and cancers of the pancreas and prostate, according to the findings, published online (Oct. 26) in the journal Lancet Oncology. But the evidence for these associations was not as strong as the evidence found for colorectal cancer. [Cancer-Fighting Diet: 6 Tips to Reduce Your Risk]

The WHO said its findings were a scientific evaluation of the evidence, rather than a set of recommendations about what people should or should not be eating.

Because the WHO findings received widespread media attention and represented a definitive health warning about the dangers of processed meat, it left many consumers wondering what to do, how to pack their lunches and whether everyone needed to become a vegetarian.

In addition, many consumers were confused about which foods fell into the categories of processed and red meats, which compounds in these foods seemed to promote cancer, or how much of these meats, if any, were safe to include in a person's diet.

For answers to these and other pressing questions, Live Science turned to two experts on nutrition and cancer prevention.

The WHO data showed that a person who eats a little bit less than 2 ounces of processed meat a day, which is equal to one small hot dog or about two slices of salami, is 18 percent more likely to develop colorectal cancer than someone who eats none, said Alice Bender, a registered dietitian and the associate director of nutrition programs at the American Institute for Cancer Research. AICR is a nonprofit group based in Washington, D.C., that supports research on diet, nutrition and cancer prevention, and was not involved in the WHO report.

Bender said that processed meat is any meat that has been preserved by smoking, curing, salting or adding chemical preservatives.

This puts most of the cold cuts at the supermarket deli counter — such as ham, pastrami, turkey and bologna — into this category, along with bacon, sausage, hot dogs, corned beef, pepperoni, beef jerky as well as canned meat, like Spam. Turkey bacon and turkey sausage are also processed meat, as are smoked turkey and smoked chicken, Bender said.

Red meat includes beef, pork, veal and lamb, and also horse, goat and mutton (meat from sheep), although these are rarely consumed in the United States.

Although research has not yet revealed exactly why diets high in processed meat and red meat increase the risk of colon cancer, the WHO report has identified a few possible culprits that may be responsible.

Some of the substances used in the smoking process to preserve meats may lead to the formation of the cancer-causing compounds called polycyclic aromatic hydrocarbons (PAHs), Bender told Live Science.

Also, processing meat often involves using nitrites as preservatives to prevent bacterial growth and as coloring agents, but nitrites may form compounds called N-nitroso compounds. Red meat has a lot of iron in a form called heme iron, which may also stimulate the production of N-nitroso compounds in the gut. The compounds have been found to cause cancer in animal studies, Bender said.

Cooking methods may also play a role. High-temperature methods, such as grilling, frying or broiling, which might be used with beef or pork, can form more cancer-promoting chemicals, such as heterocyclic amines (HCAs), and the char on the outside of meats can contain PAHs. [10 Do's and Don'ts to Reduce Your Risk of Cancer]

Although the WHO report didn't make any dietary recommendations, and the American Cancer Society Guidelines on Nutrition and Physical Activity and Cancer Prevention currently advise people in a very general way "to limit how much processed meat and red meat they eat," the guidance from the American Institute for Cancer Research includes specific amounts of meat in its dietary recommendations.

They recommend that people avoid eating processed meat, or reserve eating it to only a few special occasions during the year, such as a hot dog at the ballpark, a sausage when tailgating and bacon on Christmas morning, Bender said.

For red meat, the AICR recommendations call for eating no more than 18 ounces of cooked red meat weekly, which is an amount that doesn't increase colon cancer risk appreciable, based on an evaluation of the evidence done for AICR by a worldwide panel of experts, Bender said. Red meat can be a source of protein, iron, zinc and vitamin B-12 in some people's diet, she said.

The conclusions reached by the WHO scientific panel come as no surprise, said Dr. Tim Byers, a professor of preventive medicine at the Colorado School of Public Health in Aurora.  Byers previously served on two expert review committees — one for the World Cancer Research Fund, and one for the American Cancer Society.

He said that both those groups reviewed basically the same set of evidence and came to similar conclusions.

"The data was quite clear from these analyses that eating processed meat can increase colon cancer risk, and that red meat can also increase the risk, but to a lesser extent," Byers told Live Science. However, the size of the risk that comes with eating processed meat is relatively small in relation to colon cancer, and it would have about the same size impact on the risk for the disease as three other known colon cancer risk factors — being overweight, being physically sedentary or not eating enough fruits and vegetables, he said.

If people decide on the basis of the WHO report to stop eating red meat, this would reduce their risk for colon cancer to some extent, Byers said. In contrast, undergoing colonoscopy screenings has a huge effect on reducing the risk of colon cancer, he said.

Editor's note: A correction was made to this article on Oct. 31. The article originally stated that the AICR was involved in writing the new report, but it was not.