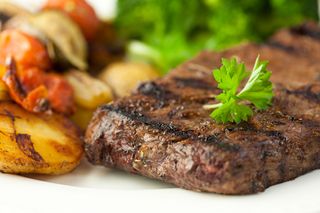 Grilling may be one of the great American pastimes – ranking right up there with fireworks on the Fourth of July – but charred chicken and steak aren't the greatest foods for our health.

While grilling is prized for its ability to cook food without added fat, the blackened bits that form on proteins such as meat and fish contain two types of chemical compounds that may contribute to cancer: heterocyclic amines (HCAs) and polycyclic aromatic hydrocarbons (PAHs).

But nutritionists still give the green light to cookouts, saying the cancer risk isn't great enough to worry about and that certain precautions, such as minimizing grilling time and trimming the fat from meat beforehand, can keep that risk to a minimum.

"It's not really about needing to avoid grilling but to have a few safety tips in mind to be healthy," said Stephanie Meyers, senior coordinating nutritionist at Dana-Farber Cancer Institute in Boston.

To understand where problems might start, it's important to know how HCAs and PAHs are created.

When proteins cook at high temperatures – as they do in broiling and frying, as well as grilling – HCAs form, particularly in the charred bits at the edges of meat. PAHs, on the other hand, form when meat juices drip onto charcoal or other hot surfaces and create smoke. As this smoke circulates around the cooking food, its carcinogens stick to food's surfaces.

"A smoky grill is a dangerous grill," Meyers told MyHealthNewsDaily. "The smokier a grill is, the more carcinogens you're forming."

For those who want to grill their food and eat it too, there are ways to make the indulgence safer. Meyers' suggestions:

Vegetables make an ideal grilled food because they aren't made of protein and don't create HAs, Meyers said. And fish or chicken is always a healthier selection than red meats, no matter how they're cooked.

But cookout safety doesn't center just on how and what to grill, said Beth Kitchin, an assistant professor in the department of nutrition sciences at University of Alabama at Birmingham. Meat should stay in the refrigerator or cooler until grilling time to avoid hazardous microbes from growing, she said.

"The biggest mistake I see people make is cross-contamination," Kitchin said, "by reusing containers or utensils between raw and cooked meats. Anything that has touched raw meat is potentially dangerous."

Kitchin also advised reheating grilled food that has sat out on plates or platters for more than an hour.

All in all, grilling a few times per week is perfectly acceptable, Meyers said.

"I think we want to keep the risk in perspective," she said. "If people follow the safety tips and eat an abundant amount of fruits and vegetables . . . grilling is very low in relative risk. Even if you just change two or three of your behaviors at the grill, you're doing yourself a favor."

Pass it on: Reduce grilling time and minimize smoke to make your cook out healthier.