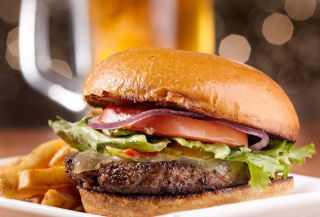 A regular hamburger or steak dinner may take years off your life, a new study suggests.

Participants in the study who ate red meat — particularly processed meat — on a regular basis were more likely to die over a 20- to 30-year period, compared with those who didn't consume red meat regularly.

The results also showed that substituting other healthy protein sources, such as fish, poultry, nuts or legumes, was associated with a lower risk of death over the study period.

The results held even after the researchers took into account factors that could affect a person's risk of dying, including age, physical activity and family history of heart disease or major cancers.

"Our study adds more evidence to the health risks of eating high amounts of red meat," study researcher An Pan, of the Harvard School of Public Health in Boston, said in a statement. Eating red meat has been linked with an increased risk of certain diseases, including Type 2 diabetes, coronary heart disease and stroke, but its effects on overall risk of death have been unclear.

In a commentary accompanying the study, Dr. Dean Ornish, of the University of California, San Francisco, highlighted the environmental benefits of a diet lower in red meat. "What is good for you is good for our planet," Ornish said.

The study and commentary are published online today (March 12) in the journal Archives of Internal Medicine.

Pass it on: Red meat consumption may increase the risk of death from any cause.