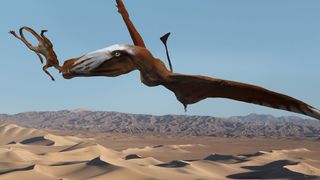 An artist's interpretation of the newfangled pterosaur snacking on a primitive crocodylomorph known as a sphenosuchian.
(Image: © Josh Cotton)

Editor's Note: Live Science initially covered this newfound pterosaur at the 75th annual Society of Vertebrate Paleontology in Dallas, Texas, in 2015. Now that the peer-reviewed study is published in the journal Nature Ecology & Evolution, we're happy to share the scientific name of this magnificent beast: Caelestiventus hanseni.

The genus name of this Triassic-age pterosaur comes from the Latin words "caelestis" and "ventus," which together mean "heavenly wind." The species name honors Robin Hansen, a geologist with the U.S. Bureau of Land Management, who facilitated the exaction at the Saints and Sinners Quarry in Utah. Read our full coverage below.

A little more than 200 million years ago, a four-fanged pterosaur flew over the vast desert of Triassic Utah snagging other reptiles with its toothy mouth, until it met its untimely end on the banks of a dried-up oasis, new research finds. [Photos of Pterosaurs: Flight in the Age of Dinosaurs]

The pterosaur had a massive wingspan of about 4.9 feet (1.5 meters) — about as wide as a 10-year-old child is tall — and sported a total of 110 teeth, four of them inch-long (2.5 centimeters) fangs, said study researcher Brooks Britt, an associate professor of geology at Brigham Young University in Utah.

Brigham Young University student Scott Meek found the specimen, including its skull and bones from its body, in 2014 when he was excavating bones from a 300-lb. (136 kilograms) chunk of sandstone. The chunk came from the Saints and Sinners quarry in Utah near the Colorado border, Britt said.

"The [quarry] site dates to the Late Triassic, about 210 million years [ago], when Pangaea was still together, and vast desert stretched from what is now southern California to Wyoming," Britt told Live Science. (The supercontinent Pangaea didn't begin to break up until about 200 million years ago.)

The pterosaur fossil is remarkably well preserved, not crushed like other pterosaur remains. "Outside of a find in Greenland, this is the first good Triassic pterosaur from North America," he said.

A geologic analysis of the quarry suggests that, during the Late Triassic, many animals congregated around a lush oasis — decked out with plants — surrounded by a vast desert. But then the oasis dried up, leaving the fauna and flora without a drop of water.

"The animals likely died during a severe drought, and the sediments indicate their carcasses were buried when the rains returned to normal and the lake filled, with the lapping waves burying the bones with sand," Britt said.

The ancient sand and water did such a good job of preserving the pterosaur's fossils, that researchers can create a detailed picture of the animal. For instance, the pterosaur has spaces in its braincase and lower jaw that suggest the bones were air-filled in life, just like the bones of later pterosaurs and birds (to which pterosaurs are not related), Britt said.

Furthermore, the pterosaur has surprisingly small eyes, and its dentition is "quite a mix, with a combination of fangs and miniscule teeth in each side of the lower jaws," Britt said. In all, it has 80 teeth on its lower jaws (including the four fangs), and 30 on its upper jaws, including eight little ones in the front and 22 medium teeth in the back.

Its odd smile isn't all that different from other early pterosaurs, which tend to sport a mix of dramatically differently shaped teeth; that's unlike pterodactyloids (another type of flying reptile), which often lacked teeth, Britt said.

Also, like the Dimorphodon, a medium-size pterosaur that lived during the Jurassic, the newfound species has a relatively large head and comparatively short wings, indicating it didn't soar over vast areas, but likely flew in places filled with trees and other obstacles. They probably fed on insects or small land-dwelling animals, including a small crocodylomorph known as a sphenosuchian, which Britt described as a fast creature resembling a crocodile, but with the legs of a Chihuahua. [Image Gallery: 25 Amazing Ancient Beasts]

The researchers found a treasure trove of sphenosuchian fossils at the ancient oasis. They also found at least 20 individual coelophysoid theropods (bipedal, mostly meat-eating dinosaurs), the teeth of a much larger theropod, a drepanosaurid (a creature with a head like a bird, arms like a mole and a claw at the end of its tail) and two types of sphenodontids (which looks like the modern tuatara of New Zealand).

"Pterosaurs were the first vertebrates capable of active flight," Britt said. "This finding is further evidence that flight opens up a wide array of niches for occupation, in this case feeding on insects and small vertebrates that thrived along the shores of an oasis in the middle of a giant desert."

Editor’s Note: Live Science published the original version of this article on Oct. 26, 2015.