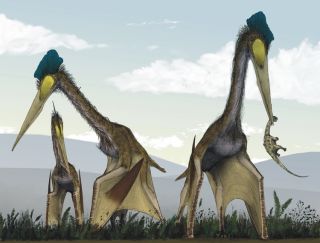 Giant toothless pterosaurs with wingspans stretching 39 feet (12 meters) across ruled the skies 60 million years ago, and new research suggests that these ancient flying creatures once had a worldwide presence, and likely played an important role in the Late Cretaceous ecosystem.

Despite their formidable size, the pterosaurs in the Azhdarchidae family had no teeth. The new research suggests they replaced their toothed relatives as the dominant species when high levels of carbon dioxide killed off important microscopic marine creatures, leading to a mass extinction about 90 million years ago.

"This shift in dominance from toothed to toothless pterodactyloids apparently reflects some fundamental changes in Cretaceous ecosystems, which we still poorly understand," Alexander Averianov, from the Russian Academy of Sciences, wrote in a new study of this type of pterosaur. [Photos of Pterosaurs: Flight in the Age of Dinosaurs]

Fossil records show that pterosaurs were likely the first airborne vertebrates and they took to the skies around 220 million years ago. Some were so large they likely had to get a running start before taking off and had a hard time landing, according to research presented at the 2012 Geological Society of America meeting. The name Azhdarchidae comes from the Persian word "aždarha," which means dragon.These toothless creatures lived during the Late Cretaceous Period, about 70 million years ago.

Scientists know little about pterosaurs, since their fossil record is largely incomplete. Pterosaur bones are more fragile than other dinosaur bones and there are few that have survived. Most Azhdarchidae pterosaur fossils are preserved in soft sediment deposits called Konservat-Lagerstätten. These kinds of fossils are rare for the Late Cretaceous, so paleontologists have a hard time piecing together the pterosaur lineage.

In a 2008 review of Azhdarchidae, scientists examined 32 bones, but Averianov examined 54 known Azhdarchidae fossils: 51 bones and three fossilized tracks. The giant creatures likely lived in a variety of environments, but after closely examining the sediments in which the fossils were discovered, Averianov discovered that most of the toothless pterosaurs probably lived near lakes and rivers and along coastlines.

Most Azhdarchidae species are only defined based on a few fragmented bones. The more complete skeletons scientists have discovered are not very well preserved. This lack of fossils led researchers to create an "inflated" number of pterosaur species, according to Averianov. After reviewing the taxonomy, Averianov found that paleontologists created separate species of Azhdarchidae based on sparse fossil evidence and may have misclassified some of the bone fragments.

In an effort to learn more about the evolution of pterosaurs, scientists created an online database of fossils called PteroTerra,which maps out the distribution of these ancient creatures using Google Earth.

The new taxonomy research was published Aug. 11 in the journal ZooKeys.