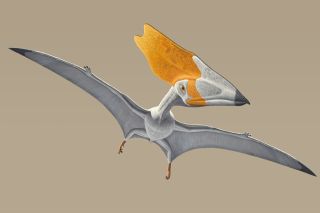 The pterosaur Thalassodromeus sethi would have soared the skies above what is now Brazil some 110 million years ago, dwarfing other creatures with its 14-foot-long (4.3 meters) wingspan.
(Image: © ©AMNH 2014)

Want to find the nearest pterosaur? There's an app for that — or a database, at least.

A newly developed website catalogs more than 1,300 specimens of extinct flying reptiles called pterosaurs, thus enabling users to map out the ancient creatures on Google Earth. The goal is to help researchers find trends in the evolution and diversity of these ancient winged reptiles.

"Having a very specific database like this, which is just for looking at individual fossil specimens of pterosaurs, is very helpful, because you can ask questions that you couldn't have answered with bigger databases [of more animals]," said Matthew McLain, a doctoral candidate in paleontology at Loma Linda University in California and one of the three developers of the site. McLain and his colleagues call their database PteroTerra. [Pterosaur Photos: Flight in the Age of Dinosaurs]

Pterosaurs were the first flying vertebrates. They lived between 228 million and 66 million years ago, and went extinct around the end of the Cretaceous period. During that time, this group evolved to be incredibly diverse. Some were tiny, like the sparrow-size Nemicolopterus crypticus, which lived 120 million years ago in what is now China. Others were simply huge, like Quetzalcoatlus, which was as tall as a giraffe and probably went around spearing little dinosaurs with its beak like a stork might snack on frogs.

Paleontological databases are common tools, because they allow researchers to navigate through descriptions of fossil specimens. One of the largest, the Paleobiology Database, has more than 50,000 individual entries.

McLain and his colleagues wanted something more targeted. They painstakingly built PteroTerra from the ground up. McLain, as the paleontologist on the project, read published papers on pterosaurs and visited museums to catalog specimens.

"I think we have every species represented, so in that sense, it's pretty complete," he told Live Science. The database does not contain every specimen of pterosaur material ever found — tens of thousands of fossil fragments have been discovered — but McLain hopes to get other paleontologists on board as administrators to upload their specimen data.

The team chose to link their data to Google Earth so that anyone could sign up and download it.

"Anybody can just pull this up really fast — the point being that you'd be able to plot where all these different specimens are on Earth, and you might be able to see if there was any sort of trend that maybe we haven't noticed," McLain said.

In October 2013, McLain and his team gave a presentation at the meeting of the Geological Society of America in Denver, in which they described using the database to do just that. They studied pterosaur habitats and diversity over time.

"The trend we found matched what other people had discovered through lots of time and energy and effort," proving that the database can work quickly to get the right answer, McLain said. Pterosaur diversity increased over time, peaking in the early Cretaceous period, only to decline after that, he said. The increase in diversity seems to correlate with an expansion of pterosaur habitat. Early in their existence, the animals lived around oceans, probably snatching fish from the water as seagulls do now (and perhaps occasionally getting snatched themselves). Later, more and more species were found living over land, too.

McLain said that other paleontologists have approached him to discuss starting databases for other ancient beasts, like the marine plesiosaur. He would like to create a database of dinosaur footprints and trackways, as a way to get a broader geographical view of dino travel.

"It would be really interesting if you found tracks in several of the same layers that are pointing in the same direction, generally," McLain said. "That could tell us something about migrations."

The researchers reported the new database online June 23 in the journal Historical Biology.