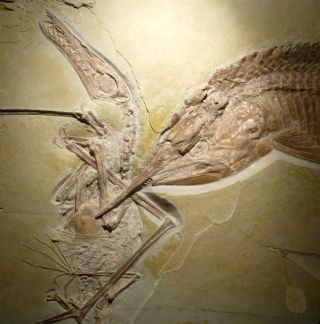 The jaws of the armored fish seemed to have grasped onto the pterosaur's left wing, which is distorted in the fossilized hunting scene.
(Image: © PLoS ONE)

An ancient armored fish was fossilized in the act of attacking and drowning a pterosaur in a toxic Jurassic lake, revealing that the winged reptiles were victims of a wide variety of carnivores, scientists find.

Pterosaurs dominated the skies during the Age of Dinosaurs. Still, flight did not always ensure them safety — researchers have recently discovered that Velociraptor dined on the flying reptiles.

Now scientists have uncovered five examples of the long-tailed pterosaur Rhamphorhychus apparently within the jaws of the ancient armored predatory fish Aspidorhynchus. The fossils in question, unearthed in Bavaria in southern Germany, are about 120 million years old.

All of the pterosaur victims discovered, which had wingspans of about 27 inches (70 cm), were positioned such that their wings were near the mouths of their 25-inch-long (65 cm) fish predators. That suggests that the predator might have grabbed hold of their wing membranes. In one specimen, a pterosaur wing bone is actually caught within the jaws of the fish. In another of the fossils, the pterosaur has a tiny fish in its throat, apparently swallowing it headfirst. This suggests the flying reptile was alive when it was seized, and not dead and perhaps scavenged by the armored fish. [Album: 25 Amazing Ancient Beasts]

The researchers speculate the Aspidorhynchus fish attacked the pterosaur while it was flying just above the water surface right after plucking a fish from the sea, grabbed the pterosaur's left wing and pulled the animal under water.

Nowadays birds and bats are occasionally eaten by sharks and other large fish. Still, the researchers do not think that pterosaurs were regularly part of the diet for Aspidorhynchus. In fact, these attacks were probably lethal mistakes.

"These animals normally have nothing to do with each other," said researcher Eberhard Frey, a paleozoologist at the State Natural History Museum in Karlsruhe, Germany. "Apparently these encounters were fatal for both of them."

The fish could neither swallow the pterosaurs nor work their jaws free, since the fibrous tissue of a pterosaur's tough, leathery wings would have become entangled with the fish's densely packed teeth. After fighting the pterosaurs for a while, the fish would have likely sunk into the hostile, oxygen-poor  water it lived in, where it would have suffocated.

"Fish sometimes don't take care with what they eat, because their brains are not very smart," Frey told LiveScience. "Occasionally you find fish that died because they ate another fish that was too big to get swallowed, and the same things happened here with these pterosaurs."

Frey and his colleague, Helmut Tischlinger, detailed their findings online March 7 in the journal PLoS ONE.