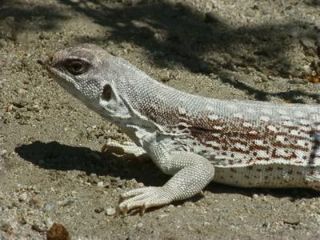 The desert iguana, Dipsosaurus dorsalis, is one of the 66 species of lizards the researchers studied in their analysis.
(Image: © Theodore Garland, UC Riverside)

Iguanas are lizards identified by their stocky stature, the saggy skin on their throats and the spines that protrude from their heads, necks, backs and tails. Iguanas are popular pets and can live 15 to 20 years if cared for properly.

The longest of the iguanas is the green iguana. It grows to between 5 and 7 feet (1.5 to 2 meters) long from nose to tail. The smallest of the group is the spiny-tailed iguana, which grows to 4.9 to 39 inches (12.5 to 100 centimeters) long. The heaviest iguana is the blue iguana. It can weigh up to 30 lbs. (14 kilograms), according to the San Diego Zoo.

Iguanas like warm temperatures because they are cold blooded. This means that the outside temperature is what keeps them warm since they have no way to regulate internal heat with their own bodies. These lizards are found in Mexico, Central and South America, the Galápagos Islands, on some of the Caribbean islands, Fiji and Madagascar. They typically live in tropical and subtropical forests, deserts and coastlines, according to the San Diego Zoo. The University of Florida also reports that there are iguanas running free in south Florida due to people setting their pets loose.

Overall, most iguanas are herbivores and only eat vegetation such as flower buds, fruits and young leaves. The marine iguana will get its meal by scraping algae from rocks in the ocean or by munching on sea weed, according to National Geographic. Pet iguanas and some wild iguanas enjoy worms, crickets and baby mice along with vegetation.

Iguanas are social creatures that eat and live together. Male iguanas are very territorial, though, and will fight other encroaching male iguanas. It is easy to identify male iguanas that are not dominant. They have broken and stubby spines that were damaged in battles with more dominant iguanas, according to the San Diego Zoo.

Since they don't need to actively hunt for their food, iguanas are very laid back creatures. Iguanas typically spend their days lounging in the sun to keep warm and from time to time they will get up for a snack. The green iguana will forage in the same spot every day, according to the Smithsonian.

Like most lizards, iguanas lay eggs, though the number of eggs varies, depending on species. The female rock iguana lays five to 20 eggs, for example, while the green iguana lays around 65 eggs.

Eggs are laid in a burrow in a warm, sunny area. The mother covers the eggs and then walks away. According to the San Diego Zoo, the burrow will stay a steady 77 to 89 degrees Fahrenheit (25 to 32 degrees Celsius), which incubates the eggs until they hatch. The baby iguanas are completely on their own for the three years it takes to fully mature because their mother never returns. Many young never make it to maturity.

There are 35 recognized species of iguana, according to the University of Michigan's Animal Diversity Web. However, ADW reports that the Iguanid family is undergoing "much systematic revision." The taxonomy of iguanas, according to the Integrated Taxonomic Information System (ITIS), is:

According to the International Union for Conservation of Nature (IUCN), iguanas are among the most endangered animals in the world. In the wild, iguanas' numbers are dropping drastically due to loss of habitat and predators. The Fiji banded iguana, for example, is found on only two islands, and its population has dropped by 50 percent in the past 30 to 45 years.

The Galápagos pink land iguana is labeled as critically endangered. As of 2012, only one small population existed in an area of less than 25 square kilometers (9.6 square miles). Only 192 mature members were counted. The Utila spiny-tailed iguana is also considered critically endangered. It's only found on the island of Utila, Honduras, and its population is believed to be less than 5,000.

The Galapagos marine iguana is black. The dark color helps absorb heat from the sun after a swim in the ocean to keep the lizard warm. Marine iguanas also have flattened tails that let them swim through the water like crocodiles.

Green iguanas are tough. They can drop from a branch up to 40 feet (12 meters) high, hit the ground and survive, according to National Geographic.

In Central and South America, people farm and eat iguanas.