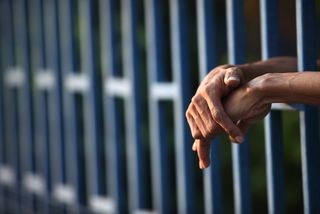 Burn him? Hang him? Or let him go? New research illuminates how the human brain decides the severity of a criminal's punishment, scientists say.

Several brain regions do battle in determining the appropriate level of justice, depending on the person's level of guilt, a study has found.

Often, people demand swift and severe punishment, particularly when the crime involves bodily harm to others and is relayed in gruesome detail. Yet certain brain regions can override this gut emotional response when the harm was not intentional, regardless of how shocking the incident was.

Scientists say they now understand how the brain can come to such a rational conclusion. Their study appeared Sunday (August 3) in the journal Nature Neuroscience.

In an experiment, 30 volunteers read a series of scenarios in which a protagonist named John brought harm to another person, named either Steve or Mary. The scenarios depicted four different levels of harm: death, maiming, physical assault or property damage. [The 10 Most Destructive Human Behaviors]

As the volunteers read the often-grisly accounts, their brains were imaged using functional MRI (fMRI) to determine which regions were being activated.

One graphic scenario read, "Steve plummets to the rocks below. Nearly every bone in his body is broken upon impact. Steve's screams are muffled by thick, foamy blood flowing from his mouth as he bleeds to death."

The scientists found that when descriptions of harm resulting in death were this lurid, the volunteers were more likely to demand greater punishment than when the description was factual and devoid of emotion … but only to a degree.

"This was only true when participants were led to believe that the death was intentional," said Dr. Michael Treadway, a post-doctoral fellow at Harvard Medical School in Boston and lead author of the study. "Our emotionally provocative language had no effect on punishment when the harm was unintentional."

That is, in the scenario above, the study volunteers were less likely to punish John in this rock-climbing expedition gone wrong if the ropes accidentally slipped from his hands, compared with if John dropped the ropes on purpose.

The neuroimaging data from the volunteers suggested that when the death was perceived as intentional, brain areas associated with emotional arousal, such as the amygdala, were more active in response to the graphic language. Those regions also showed stronger communication with an area called the dorsolateral prefrontal cortex, which is critical in decision making on punishments.

"In contrast, when the death was unintentional, the amygdala was not reactive to the graphic language and appeared to be regulated by other brain areas involved in processing the intentions of others," Treadway told Live Science.

Specifically, the researchers found that a region called the temporoparietal-medial-prefrontal circuit is what suppressed the raw-emotion impulse of the amygdala, thwarting its effect on decision-making areas, he said.

"This is basically a reassuring finding," said Dr. René Marois, a professor of psychology at Vanderbilt University and senior author on the report. "A fundamental aspect of the human experience is the desire to punish harmful acts, even when the victim is a perfect stranger. Equally important, however, is our ability to put the brakes on this impulse when we realize the harm was done unintentionally."

Those brakes entail a "regulatory network," rather than simply one brain region, the researchers wrote. The study may have implications for social interactions involving conflict resolution and not just crime, the researchers concluded.

The scientists said they could not speak to the relevance of their findings across cultures and time. For example, in many parts of the world, people impose severe punishments for seemingly trivial crimes, such as cutting off a starving person's hands for stealing a loaf of bread.

Treadway speculated that such a scenario might involve perceived guilt and perceived severity of that crime by that culture.