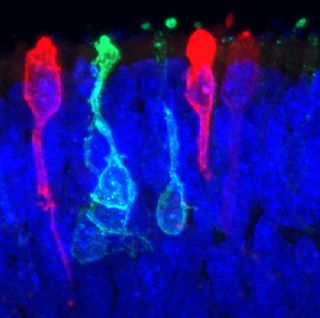 Scientists have created what they say is essentially a miniature human retina in a dish, using human stem cells.

This development could one day lead to treatments for those with several forms of vision loss, including blindness, researchers added.

The retina is the layer of cells at the back of the eyeball that helps the eye sense light and relay visual data to the brain. Many forms of vision loss result from the malfunction or death of the light-sensitive cells known as photoreceptors in the retina.

One potential way to deal with retinal disorders is to grow new retinal tissue. In previous work, scientists had reprogramed adult cells to their most primitive state, turning them into so-called induced pluripotent stem cells that could in principle become any type of cell in the body.

Researchers had used these stem cells to generate retinal tissue, including photoreceptors, in lab dishes,, but the photoreceptors that developed did not respond to light.

In the new study, the scientists further coaxed these stem cells, getting them to develop into advanced photoreceptor structures. The cells created a complex, 3-D retinal structure with photoreceptor cells capable of responding to light, the first step in the process of converting light into visual images for the brain. [5 Crazy Technologies That Are Revolutionizing Biotech]

"We have basically created a miniature human retina in a dish that not only has the architectural organization of the retina, but also has the ability to sense light," study team leader Maria Valeria Canto-Soler, a developmental biologist at Johns Hopkins University School of Medicine in Baltimore, said in a statement.

The process normally followed by retinal cells as they develop from stem cells involves complex, dynamic environments and highly coordinated interactions among cells. As such, most attempts to spur induced pluripotent stem cells into becoming retinal cells have involved elaborate cocktails of molecules.

Instead, in this latest work, lead study author Xiufeng Zhong, an ophthalmologist and postdoctoral researcher at Johns Hopkins University School of Medicine, along with Canto-Soler and their colleagues, opted for a simpler approach. Rather than flooding the stem cells with chemicals, the researchers varied the physical conditions that surrounded the cells. Those conditions include the types of surfaces the cells were put on and how closely the cells were placed together.

The right combination of these physical conditions, the researchers found, spurred the cells into generating their own chemicals, which made them develop into retinal structures.

"I thought we really needed to try to recreate, as well as we could, the situation in the body that cells experience when they form a retina," Canto-Soler told Live Science.

Retinal tissue is complex, made up of seven major cell types, including six kinds of neurons, which are all organized into specific cell layers that absorb light and transmit signals to the brain for interpretation. The retinas the scientists developed in the lab contained all the major retinal cell types arranged three-dimensionally in their proper layers.

"The most surprising and exciting thing was that stem cells were able to follow the whole process of forming a human retina in a petri dish almost on their own, to the point it was able to respond to light like a normal retina," Canto-Soler said. "When we started this project, we weren't really shooting for this — we didn't think this would happen."

The researchers waited until the retinal tissue reached a stage equivalent to that of a fetus that had been developing for 28 weeks in the womb, meaning it possessed fairly mature photoreceptors. At that point, the scientists tested these miniature retinas to see if the photoreceptors could actually sense and transform light into visual signals. These experiments involved placing an electrode into a single photoreceptor cell and then giving a pulse of light to the cell. The lab-grown photoreceptors responded to light the way their normal brethren do.

In principle, using this technique, scientists could generate hundreds of mini-retinas from cells taken from patients suffering from retinal diseases such as retinitis pigmentosa, which often causes blindness. These lab cultures could then help researchers study the causes of these eye diseases in human tissue, instead of relying on lab animals, and could also help test medicines against such diseases. In the long term, lab-grown retinas could even replace diseased or dead retinal tissue, thus restoring vision.

"However, it's important to not raise false expectations," Canto-Soler said. "What we have now does not cure blindness, and cannot be applied to treat patients in the short term. It's valid to say this is an important step forward, and this system has incredible potential for possible therapeutic applications, but it's a long way to apply it to patients to treat retinal diseases."

The scientists detailed their findings online June 10 in the journal Nature Communications.