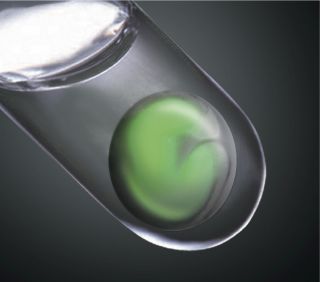 Lab-grown human organs may seem like futuristic technology, but in a lab in Kobe, Japan, researchers are growing new retinas in a dish.

"This retina tissue made in the test tube was clearly real. It mimicked the complex structure of the retina in the eye," said Yoshiki Sasai at the RIKEN Center for Developmental Biology in Kobe, lead researcher on the study, published tomorrow (April 7) in the journal Nature.

The retina, the tissue lining inside the back of the eye, is made up of seven different cell types arranged into six distinct layers. It enables us to see, because it has special cells that respond to light and send messages to our brain. Diseases of the retina, such as retinitis pigmentosa, which occurs in about 1 in 4,000 people, can result in eventual blindness. [Image of lab-grown retina]

The researchers, led by Sasai, have discovered a way to coax mouse embryonic stem cells into forming an eyelike structure. The so-called "eye-cup" takes the same amount of time to develop as a typical mouse eye (about 20 days of pregnancy plus continued development several days after birth) and has all of the same cellular characteristics.

The development of this eye-cup is almost fully self-directed. The researchers only needed to coax the embryonic stem cells, which can become any cell in the human body, into becoming eye cells. They expected to see a culture of one type of retinal cells, but after this laboratory-based nudge (which involved hormones and other substances) the cells grew, changed into several different types and arranged themselves into this structure all on their own. [Scientists Envision Growing Human Eyeballs]

"We didn't think this kind of complex structure would be able to be made in culture," Sasai told LiveScience. "The really impressive message from this finding was that the structure of retina is internally programmed, the cells have all the information to make the retina. We just let it happen."

The eye-cup develops from a grouping of about 3,000 cells by first growing a loop outward from the center, then folding those cells into a shape reminiscent of a brandy glass. The cell cup then grows to nearly 1/10 of an inch (2 millimeters) wide and develops all the layers of a developing eye, including the light-sensing cells called photoreceptors, ganglion cells that attach to the optic nerve and pigmented cells that give our eyes their color.

The only missing parts from the eye-cup were the blood flow to the retina and the nerve connection that sends signals to the brain. In retinal degenerative diseases like retinitis pigmentosa, this connection to the brain is undamaged and would be able to send signals, but the retina can't detect them. If the retina were repaired or replaced, vision could be restored.

As the testing goes forward, there are many possible applications of these eye structures. Researchers are currently testing if these cells can actually detect light and send signals, but they have high hopes, Sasai said. If that proves successful, the researchers are going to try to implant them into mice with retinal degeneration to see if they can regain their sight.

The structures can also be used to learn more about the molecular details of eye development, which could help researchers understand other retinal diseases, improving treatments and helping develop cures by test drugs and genetic therapies.

They are also working on making the same eye-cup structures from human stem cells, though the structure is larger and takes much longer to develop than the mouse eye. "Once made from human embryonic stem cells, it would be great material for grafting to the retina," Sasai said. "We have a technical basis for an infinite supply for human retina in a few years."

"The likelihood of growing a complex organ such as an eye in a dish, however, has seemed remote and futuristic," Robin Ali and Jane Sowden, researchers uninvolved in the project from University College London, write in their News and Views article on the paper in the same issue. "Now, Eiraku et al reveal with startling beauty and remarkable clarity that the complex process … can occur spontane­ously in culture."