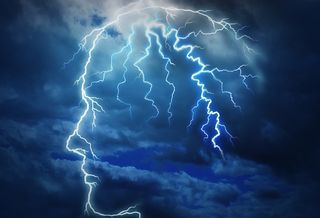 A person's recovery after a major stressful event may depend in part on their self-esteem, a new study finds.
(Image: © Brain image via Shutterstock)

How well a person recovers from traumatic events may depend on in part on their self-esteem, according to researchers who examined the effects of a major earthquake on the survivors' brains.

The researchers had conducted brain scans of university students for a study before the Great East Japan Earthquake struck in 2011. After the earthquake, they repeated the scans on 37 of the same people, and tracked stress-induced changes in their brains in the following months.

"Most importantly, what these findings show, is that the brain is dynamic — that it's responding to things that are going on in our environment, or things that are part of our personality," said Rajita Sinha, professor of psychiatry at Yale School of Medicine, who wasn't involved in the study. [Top 10 Mysteries of the Mind]

In the brain scans taken immediately after the incident, the researchers found a decrease in the volume of two brain regions, the hippocampus and orbitofrontal cortex, compared with the scans taken before the incident.

One year later, the researchers repeated the scans and found that the hippocampus continued to shrink, and people's levels of depression and anxiety had not improved.

However, other changes in the brain had reversed, the researchers found: The volume of the orbitofrontal cortex had increased. Moreover, this increase was correlated with survivors' self-esteem scores soon after the earthquake, according to the study published today (April 29) in the journal Molecular Psychiatry.

The findings suggest that structural changes in the brain following a stressful event are not static, but dynamic, throughout one's lifetime, study researcher neuroscientist Atsushi Sekiguchi and his colleagues wrote in their study.

It is possible that people with higher self-esteem, which is important to a person's resilience in the face of stressful life events, can regulate emotional distress more successfully, and this is reflected in their brain changes, the researchers said.

The researchers noted that the study cannot show a cause-and-effect relationship, and it is difficult to know whether it really is higher self-esteem that results in better recovery from trauma, or something else that is related to self-esteem has a role.

Also, more research is needed to confirm that the stress-induced alterations in brain structure are indeed reversible, the researchers said.

But previous studies have found that highly stressful events can cause structural changes in both the orbitofrontal cortex and hippocampus.

"These regions are part of the network that takes the hit in a traumatic event, said Sinha, who studies the effects of stress on the brain.

The reason why the hippocampus and orbitofrontal regions are vulnerable to stress may lie in their biology.

"These regions are more affected because both respond to neurochemicals that are involved in the stress response, like cortisol, and also norepinephrine, which is our fight-or-flight neurochemical," Sinha told Live Science. "So when there's high impact of stress or trauma, you can imagine that there's a flooding with these neurochemicals, and that can affect the brain cells."