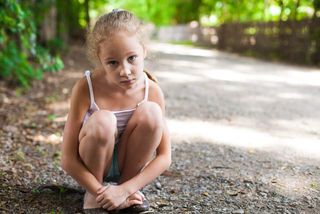 Some stress is normal, but chronic strain may be linked to brain changes, scientists find.
(Image: © altanaka | Shutterstock)

Intense and lasting stress may deliver a blow to a kid's noggin, say researchers who found that a brain area linked to memory was smaller in children who had experienced chronic stress compared with their less-strained counterparts.

The brain differences also bore out in cognitive ability, with those children with highly stressful lives performing poorer than other kids on spatial memory tests. The highly stressed children also had more trouble with tests of short-term memory, including tasks such as finding a token in a series of boxes, the researchers said.

"All families experience some stress, so it is important to note that effects were found for high levels of stress," study researcher Jamie Hanson, a psychology graduate student at the University of Wisconsin-Madison, told LiveScience, adding that some extreme examples would include family members falling victim to violent crimes or the chronic illness of a child or other family member.

The research, detailed in the June 6 issue of the Journal of Neuroscience, adds to other evidence of the impacts of stress, with one recent study showing that children exposed to multiple instances of violence age faster on a cellular level. Another past study suggested childhood stress could actually take years off an individual's life. [5 Ways Your Cells Deal With Stress]

The team was inspired by work in animals that has found a link between stress and brain changes, particularly in the prefrontal cortex, which is involved in working memory, or the part of your memory that's available for quick recall.

So with funding from the National Institutes of Health, the researchers conducted interviews with 61 children ages 9 to 14, asking about stressful events throughout their lives.

They also used magnetic resonance imaging (MRI) to scan each participant's brain, finding the anterior cingulate, which resides in the prefrontal cortex, took up less space in the highly stressed children. The anterior cingulated cortex is thought to play a role in a range of emotional and cognitive tasks, including so-called spatial working memory, or the workstation of sorts, where spatial information can be processed and accessed quickly.

"These are subtle differences, but differences related to important cognitive abilities," Hanson said.

The researchers also looked at differences in the amounts of gray matter and white matter in the brain, finding both types of tissue showed smaller volumes in the overly stressed group compared with the not-so-stressed. (White matter comprises the long, spindly appendages on some neurons that transmit electrical signals used by brain cells to communicate; gray matter is made up of the cell bodies that essentially use the information shared by the white matter to "do the math.")

Hanson and his colleagues aren't sure of the mechanism behind the links between stress and brain changes, though they have some ideas.

"Exposure to very high levels of stress could change important chemicals in the brain and body," Hanson said, noting two chemicals of particular interest, cortisol and dopamine. The hormone cortisol tends to increase with stress and can affect brain cells, Hanson said.

"We're not trying to argue that stress permanently scars your brain. We don't know if and how it is that stress affects the brain," Hanson said. "We only have a snapshot, one MRI scan of each subject, and at this point, we don't understand whether this is just a delay in development or a lasting difference. It could be that, because the brains is very plastic, very able to change, that children who have experienced a great deal of stress catch up in these areas."