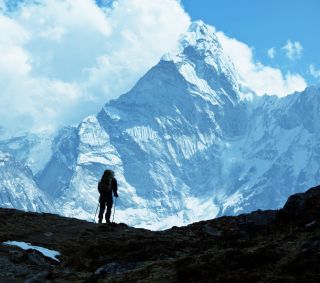 How high can we climb before the lack of oxygen kills us?
(Image: © Image via Shutterstock)

One hears epic accounts of people surviving bullets to the brain, 10-story freefalls or months stranded at sea. But put a human anywhere in the known universe except for the thin shell of space that extends a couple of miles above or below sea level on Earth, and we perish within minutes. As strong and resilient as the human body seems in some situations, considered in the context of the cosmos as a whole, it's unnervingly fragile.

Many of the boundaries within which a typical human can survive have been fully established; the well-known "rule of threes" dictates how long we can forgo air, water and food (roughly three minutes, three days and three weeks, respectively). Other limits are more speculative, because people have seldom, if ever, tested them. For example, how long can you stay awake before you die? How high in altitude can you climb before suffocating? How much acceleration can your body withstand before it rips apart?

Experiments over the decades — some intentional, others accidental — have helped stake out the domain within which we, literally, live.

How long can we stay awake?

Air Force pilots have been known to become so delirious after three or four days of sleep deprivation that they crash their planes (having fallen asleep). Even a single all-nighter impairs driving abilities as much as being drunk. The absolute longest anyone has voluntarily stayed awake before nodding off is 264 hours (about 11 days) — a record set by 17-year-old Randy Gardner for a high-school science fair project in 1965. Before falling asleep on day 11, he was essentially a vegetable with its eyes open. [Top 10 Spooky Sleep Disorders]

But at what point would he have died?

In June, a 26-year-old Chinese man reportedly died 11 days into a sleepless attempt to watch every game of the European Cup. But he was also drinking alcohol and smoking throughout, making it difficult to ascertain his cause of death. No human has ever definitively died from lack of sleep alone, and for obvious ethical reasons, scientists can't find the breaking point in the lab.

They've done it with rats, however. In 1999, sleep researchers at the University of Chicago put rats on a rotating disc positioned over a pool of water, and continuously recorded the rats' brainwaves with a computer program that could recognize the onset of sleep. When the rats nodded off, the disc was suddenly rotated to keep them awake by bumping them against the wall and threatening to knock them into the water. The rats consistently died after two weeks of this misery. Before perishing, the rodents showed symptoms of hypermetabolism, a condition in which the body's resting metabolic rate speeds up so much that it burns excessive calories even while completely still. Hypermetabolism has been tied to lack of sleep. [The 6 Craziest Animal Experiments]

How much radiation can we absorb?

Radiation poses a long-term danger because it mutates DNA, rewriting the genetic code in ways that can lead to cancerous growth of cells. But how much radiation will strike you dead right away? According to Peter Caracappa, a nuclear engineer and radiation safety specialist at Rensselaer Polytechnic Institute, 5 and 6 Sieverts (Sv) over the course of a few minutes will shred up too many cells for your body to fix at once. "The longer the time period over which the dose is accumulated, the higher that range would be, since the body works to repair itself over that time as well," Caracappa told Life's Little Mysteries.

As a point of comparison, some workers at Japan's Fukushima nuclear plant absorbed 0.4 to 1 Sv of radiation per hour while contending with the nuclear disaster last March. Although they survived in the short term, their lifetime cancer risk increased, scientists have said.

Even if one steers clear of nuclear disasters and supernova explosions, the natural background radiation we all experience on Earth (from sources like uranium in the soil, cosmic rays and medical devices) increases our chance of developing cancer in a given year by 0.025 percent, Caracappa said. This sets a bizarre upper limit on the human life span.

"An average person … receiving an average background radiation dose every year over 4,000 years, in the absence of all other influences, would be reasonably assured of contracting a radiation-induced cancer," Caracappa said. In short, even if we eventually manage to eradicate all disease and switch off the genetic commands that tell our bodies to age, tough luck: We will never live past age 4,000.

How much can we accelerate?

The rib cage protects our heart from a hard thump, but it's flimsy security against the kinds of jostling that technology has made possible today. Just how much acceleration can our organs tolerate?

NASA and military researchers have made strides in answering that question for the purposes of safe spacecraft and aircraft design. (You don't want astronauts blacking out during liftoff.) Lateral acceleration — jerking to the side — does a number on our insides because of the asymmetry of the forces. According to a recent article in Popular Science, 14 Gs of lateral acceleration can tear your organs loose from one another. Head-to-foot motion, meanwhile, plunges all the blood to the feet. Between 4 and 8 longitudinal Gs will knock you out. (A force of 1 G is the normal force of gravity we feel here on terra firma, while 14 Gs equals the pull of a planet 14 times as massive.)

Forward or backward acceleration appears to go easiest on the body, because they allow the head and heart to accelerate together. Military experiments in the 1940s and 1950s with a "human decelerator," essentially a rocket sled that zipped back and forth across Edwards Air Force base in California, suggest we can slow down at a rate of 45 Gs, or the equivalent of the gravity of 45 Earths, and still live to talk about it. At that rate, you slow from 630 miles per hour to 0 mph in fractions of a second over a few hundred feet. We probably turn into a bag of spare parts up around 50 Gs, researchers estimate. [What Would Happen If You Fell into a Black Hole?]

What environmental changes can we handle?

Individuals vary greatly in how well they tolerate departures from normal atmospheric conditions, whether these are changes in temperature, pressure or oxygen content of the air. Bounds of survival also depend on how slowly environmental changes set in, because the body can gradually adjust its oxygen usage and metabolism in response to external conditions. But some rough estimates of our breaking points can be made.

Most humans will suffer hyperthermia after 10 minutes in extremely humid, 140-degree-Fahrenheit (60-degrees-Celsius) heat. Death by cold is harder to delimit. A person usually expires when their body temperature drops to 70 degrees F (21 degrees C), but how long this takes to happen depends on how "used to the cold" a person is, and whether a mysterious, latent form of hibernation sets in, which has been known to happen.

The boundaries of survival are better established for long-term comfort. According to a 1958 NASA report, people can live indefinitely in environments that range between roughly 40 degrees F and 95 degrees F (4 and 35 degrees C), if the latter temperature occurs at no more than 50 percent relative humidity. The maximum temperature pushes upward when it's less humid, because lower water content in the air makes it easier to sweat, and thus, keep cool. [Infographic: Human Comfort Zones]

As attested to by any sci-fi movie in which an astronaut's helmet pops off outside the spacecraft, we don't fare too well with abnormal oxygen or pressure levels. At atmospheric pressure, air contains 21 percent oxygen. We die of anoxia when that concentration drops past 11 percent. Too much oxygen also kills, by gradually causing inflammation of the lungs over the course of a few days.

We pass out when the pressure drops below 57 percent of atmospheric pressure — equivalent to that at an altitude of 15,000 feet (4,572 meters). Climbers can push higher because they gradually acclimate their bodies to the drop in oxygen, but no one survives long without an oxygen tank above 26,000 feet (7925 m).

That's about 5 miles (8 kilometers) up. The edge of the known universe lies some 46 billion light-years farther afield.