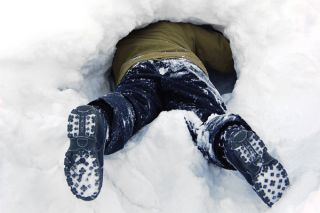 Occasionally, seemingly miraculous cases of humans going in and out of hibernation-like states are reported. In 2006, for example, a 35-year-old man was rescued on a snowy mountainside in Japan 24 days after going missing. He seemed to have survived by entering a state of nearly suspended animation: His organs had shut down, his body temperature had dropped to 71 degrees, and his metabolism had slowed almost to a standstill. Subsequently, the man made a full recovery.

How could this extraordinary event have occurred? Was the Japanese man really hibernating like a bear? And is the ability to enter and wake from a prolonged slumber restricted to a few lucky individuals, or, in the right circumstances, can we all do it?

In recent years, many scientists have come to believe that outlandish survival stories are not mere flukes or media exaggerations, but rather manifestations of a latent ability to hibernate that all humans possess.

A cell biologist named Mark Roth and his colleagues at the Fred Hutchinson Cancer Research Center in Seattle think that a gaseous compound called hydrogen sulfide may be the key to suspended animation.

In a watershed experiment in 2005, the researchers induced hibernation for the first time in lab mice by having them inhale large doses of hydrogen sulfide gas. The chemical bound with cells in place of oxygen, effectively shutting off all metabolic processes in the mice, and significantly reducing their body temperature. Hours later, when scientists replaced the hydrogen sulfide with normal air, the mice came out of hibernation and showed no adverse effects from the ordeal.

"We think this may be a latent ability that all mammals have potentially even humans and we're just harnessing it and turning it on and off, inducing a state of hibernation on demand," Roth told LiveScience, a sister site to Life's Little Mysteries, shortly after the publication of his and his colleagues' results in the journal Science.

Since then, researchers in the Roth Lab have continued experimenting with the compound. They are studying its effect on C. elegans, a species of roundworm. "Worms have exactly the same response as humans to hydrogen sulfide," Jason Pitt, a postdoctoral fellow in the Roth Lab, recently told Life's Little Mysteries. "If you get exposed to hydrogen sulfide, you have what's called a 'knockdown.' You immediately lose consciousness. If you stay there, you'll die. If you're removed and taken into fresh air, you recover. These small worms do the same thing."

Because humans and worms respond similarly to hydrogen sulfide exposure, and because C. elegans is genetically simple, making its reaction to the compound easier to decipher than ours, it is a perfect model organism for studying the chemical's intriguing effects.

Someday, researchers hope the gas can be used to induce hibernation in humans, which could enable everything from long-distance space travel to suspended animation during trauma recovery. Need to get to Jupiter, but can't fit enough food on your spaceship? Just hibernate on the way. Need a kidney transplant, but don't have an organ donor lined up? Just go to sleep and wait for one.

But we're not at that point yet. "Because we don't know more about how hydrogen sulfide is working, we haven't been able to do the same thing in people as we've done in other organisms," Pitt said. "We're starting to learn more about how this agent does what it does. By studying different related molecules and how they work, we're starting to tease out what's going on."

Even if gas exposure can eventually be used to induce suspended animation in humans, how does that explain fluke cases of humans entering hibernation by themselves?

"Since our lab's initial work, a lot of people have shown that there is hydrogen sulfide endogenously in our bodies," Pitt said. "There's growing evidence that it is this sort of internal regulatory molecule that's present in all of us. But we don't yet understand what it's doing or how it works."

Though they don't claim to know everything about it, the scientists do think the compound has been in us since life began, 3.5 billion years ago.

"It makes a lot of sense that humans and other mammals would have a latent ability to enter suspended animation," Pitt said. "Early in the history of the Earth we had no oxygen. However, you did have these sulfur compounds like hydrogen sulfide."

"There are organisms out there today in extreme environments that respirate with hydrogen sulfide," he continued. "Presumably we all came from those environments. Because biology carries its baggage around with it, it would not be surprising if humans had an ability to do some pretty ancient chemical reactions. We're talking about things that happened 3.5 billion years ago when oxygen first started to appear and when cyanobacteria started changing the Earth's chemistry."

Many types of bacteria are able to turn their metabolism on and off as a survival mechanism. According to Pitt, we shouldn't be much different.

"Our eukaryotic cells are symbiotic organisms, he said. "Our mitochondria evolved from a bacterium. Basically we're a lot more like bacteria than we like to think."