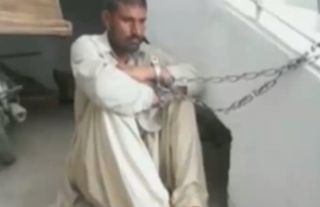 It's possible that some people, after dining on human flesh, develop a real taste for it.

Two brothers in Pakistan — Mohammad Arif and Farman Aliwere — were reportedly arrested in 2011 on charges of digging up about 100 graves and stealing the bodies, which they later allegedly consumed, according to NBC News.

"We got news this morning that they are up to their old ways," Chief Constable Zafar Iqbal of the Bhakkar district police said, as quoted by NBC. Police raided the home of the notorious pair yesterday (April 14), where authorities found the severed head of a young boy. [The 10 Weirdest Ways We Deal With the Dead]

Because Pakistan has no specific laws against cannibalism, the brothers' arrest in 2011 resulted in no more than a two-year prison sentence and a fine. Local residents held a raucous protest upon the duo's release in 2013, according to The Express Tribune.

Cannibalism around the world

Reports of cannibalism have been making headlines in recent years, prompting some people to wonder if the grisly practice is becoming more popular. In 2011, a man identified as Nikolai Shadrin was arrested in Russia after police found a stew made of human liver in the man's refrigerator.

That same year, a man from eastern Slovakia was arrested in connection with attempted cannibalism. The Slovakian was accused of planning to kill and eat a Swiss man as part of a pact the two made via the Internet. It was later discovered that this was not the Slovakian's first encounter with cannibalism.

News reports from North Korea have suggested that cannibalism has occurred in the famine-stricken totalitarian regime in recent years. One report from the British newspaper The Sunday Times stated that a man was put to death after officials discovered he had killed and cooked two of his own children.

Another report details the arrest of a North Korean man who allegedly dug up the body of his dead grandchild and ate the flesh. Elsewhere, a man who reportedly killed 11 people and sold their remains as "pork" was executed by a firing squad.

And in Papua New Guinea, a large island nation north of Australia, the father of a 3-year-old girl was accused in 2013 of taking his daughter into a wooded area and biting into her neck, eating the flesh and sucking her blood, according to the Papua New Guinea Post-Courier.

As gruesome as the incident was, it's not an isolated event, according to other reports from Papua New Guinea. The relatively unexplored country is home to millions of people who live in isolated rural villages and maintain traditional practices that may sometimes include cannibalism.

Evidence of cannibalism isn't limited to the modern era, either. Neanderthals suffered periods of starvation and may have supplemented their diet through cannibalism, according to a 2006 study of 43,000-year-old skeletal remains from northwestern Spain.

"There is strong evidence suggesting that these Neanderthals were eaten," the study's lead author, Antonio Rosas of the Museo Nacional de Ciencias Naturales in Madrid, told Live Science in an earlier interview. "That is, long bones and the skull were broken for extraction of the marrow, [which] is very nutritious."

Researchers in 2010 saw bite marks on 12,000-year-old human bones from Gough's Cave in England and 800,000-year-old remains from the extinct human species Homo antecessor at the Gran Dolina site in Spain that were likely caused by human teeth.

"They could've been under major stress over resources, and nutritional cannibalism may have been an adaptation for it," paleoanthropologist Briana Pobiner of the Smithsonian Institution, who did not take part in this study, told Live Science in an earlier interview.

While incarcerated from 2011 to 2013, the two Pakistani brothers who have been accused of cannibalism spent most of their sentence in King Edward Medical University in Lahore. There, they were reportedly being examined by the school's neurophysiology department.

Though the brothers are once again behind bars, they're apparently refusing all prison food.

"Neither one of them wanted to eat anything we offered," said Mukhtar Hussain of the Bhakkar police department.