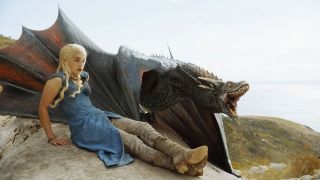 Daenerys Targaryen with one of her dragons in season 4 of HBO's "Game of Thrones."
(Image: © HBO)

The upcoming season of "Game of Thrones" will take viewers to a magical world harboring dragons, sorceresses and supernatural ice creatures. But the contested kingdom of Westeros is not entirely a flight of fancy — with its knights and lords, the setting is at least quasi-medieval.

George R. R. Martin, the author of "A Song of Ice and Fire" book series on which the HBO series is based, has said he draws inspiration from certain historical events, including the English Wars of the Roses. And viewers appreciate the series' dedication to reality, as brutal as it may be. So how close is the "Game of Thrones" world to the real Middle Ages?

Spot-on, in some aspects, experts say, but the real medieval Europe was likely far more boring and somewhat less brutal than Westeros. It was also far more religious, with the Christian Church involved in every aspect of life.

First, two caveats: Middle Ages are roughly defined as the time between the fall of the Roman Empire in A.D. 476 and the Protestant Reformation, which began in 1517 and wrapped up around 1648, though historians do quibble about the exact definition of "medieval." Regardless of the actual dates, 1,000 years is a long time, and Europe is a big place, so generalizations about "medieval times" are hard to make.

Second, Martin's fantasy world is a gritty twist on the high fantasy settings first popularized by J.R.R. Tolkien's concept of Middle Earth. Comparing Westeros with real medieval Europe is not intended as criticism of the stories; fantasy is obviously not concerned with historical accuracy. [Game of Thrones: How Characters Echo History]

That being said, Martin does capture some medieval realities, said Kelly DeVries, a medieval historian at Loyola University Maryland.

"The arms and armor are very well-respected," DeVries told Live Science. Typically, modern filmmakers go for flashy beheadings and limb-amputation-by-sword in battle, he said. In actuality, medieval armor did a good job of protecting against the weapons of the time. Someone "wearing his wealth" on the battlefield was much more likely to be captured and ransomed than killed. Longbows and distance weapons were also less accurate than typically portrayed, so the impressive through-the-helmet hits to the eye often seen on television were rare, to say the least.

"Bleeding out was the way that people died in battle," DeVries said. "The weapons would very rarely hit something vital enough to kill on impact." [Medieval Torture's 10 Biggest Myths]

Some of the show's flashier battle sequences are rooted in truth, too. Wildfire — a volatile, flammable liquid used in the Season 2 episode "Blackwater" — echoes an incendiary called Greek fire used by people in the Byzantine Empire. No one knows exactly what the substance was, but it probably included some combination of pine resin, sulfur or other incendiary chemicals.

Martin also gets historians' applause for his accurate portrayal of the Middle Ages as more violent than the world inhabited by today's audience.

"It's certainly true that homicide rates per capita were very high," said Carl Pyrdum III, a doctoral candidate in medieval history at Yale University. "It's true that most people would have encountered some sort of violent spectacle in their daily life. Public executions were common."

Justice could also be grisly, Pyrdum told Live Science. In one case, a woman was convicted of stabbing someone to death. Her sentence was to be stabbed the same number of times as she had stabbed her victim. The convicted woman died long before all 50 or so stabs had been carried out, Pyrdum said, but the stabbings continued until the sentence was complete.

"That would be really gross if it were on TV," he said.

But life probably wasn't quite as horrific as portrayed in the war-torn world of Westeros, at least not most of the time. Back then, commoners worked hard, but they were "just people," Pyrdum said.

"We have lots of records of peasants having fun — getting really drunk, celebrations, parades," he said.

Holidays and daily mass would have given peasants a break from their labor, DeVries said. Life was simple, and not particularly exciting.

During times of war, however, things may not have been so peachy. But even then, DeVries said, the nobles who were slugging it out over territory often made attempts to leave the peasants and their farms out of it.

"If you are trying to fight for that region of land, you don't want to cut off all the economic possibilities for the future," he said.

Similarly, battles were more often geared toward getting the other side to run away than toward the wholesale slaughter seen in several "Game of Thrones" battles, DeVries said. An exception to these rules was the English Wars of the Roses, a series of battles between the House of York and the House of Lancaster for the throne, from which Martin has drawn inspiration. Those wars were more widely fought and included more peasants as combatants or innocent victims, DeVries said.

"Game of Thrones" is famous among fantasy novels for including a number of women in the cast. Women did occasionally rise to power in the Middle Ages, but it was Henry VIII who brought them a dubious kind of equality: His wife Anne Boleyn was the first woman put to death for treason, said John Ashdown-Hill, an independent medieval historian involved in the real-life search for Wars of the Roses victim King Richard III.

"It's only from Henry VIII's time on that you get any women being executed [for treason]," Ashdown-Hill told Live Science. "That's something that only comes in at the 16th century."

Westeros' pitched battle for the throne would have been quite an unusual situation, Ashdown-Hill said. Most civil wars happened when a king left no clear successor, he said, unlike in "Game of Thrones," where Joffrey is acknowledged as the dead king's son (at least by name — his actual father is his mother's brother). [Fight, Fight, Fight: The History of Human Aggression]

In fact, had Joffrey come to the throne as a child king in medieval England, his uncles would have no reason to win the throne through combat, Ashdown-Hill said; rather, they would have held the power in their nephew's stead. In France, on the other hand, it was standard for the Queen Mother to hold power for her minor children on the throne, which Joffrey's mother Cersei tries to do in "Game of Thrones," with varying degrees of success.

For women in Martin's novels and the HBO show, sexual violence is a constant specter, with rape an everyday threat for many of the female characters. No doubt such violence existed in the Middle Ages, historians say, but women had some protections. Muslim armies rarely raped conquered populations, because rape was an unforgivable crime in Islam, DeVries said. Christian armies had slightly less-stringent religious prohibitions, but women were more protected than commonly depicted in popular culture, he said. The uptick in sexual brutality actually occurred after the Middle Ages, during the Wars of Religion kicked off by the Protestant Reformation, he said. In those conflicts, opposing sides saw each other as heretics and thus felt free to commit brutalities.

Rape was not accepted as a fact of civilian life, either, though the definition of sexual assault was limited. In early-medieval England, only a previously chaste or virgin women could prosecute a man for rape. In 1285, Edward I's parliament changed the definition of rape to allow for prosecution of men who raped nonvirgins, and allowed women to bring suit against attackers themselves instead of through a male relative.

The legal change suggests that rape was, indeed, seen as a serious crime in medieval Europe. But just as today, convictions could be hard to come by. Between 1208 and 1321, 49 percent of rape accusations brought to court ended up with the alleged victim arrested for false appeal, according to a 2009 master's thesis by Emory University student Stephanie Brown. In practice, patriarchal society was unable to cope with women bringing legal accusations against men in court, Brown concluded.

The most outlandish plot points in "Game of Thrones" might have felt the most realistic to medieval Europeans. Magic was part of everyday folk belief back then, Pyrdum said — though it was "really kind of boring."

"I was depressed when I found out what medieval magic and dragons were really like, because I grew up on a steady diet of Tolkien and 'Dungeons & Dragons,'" he said. [Beasts & Dragons: How Reality Made Myth]

Instead of "fireball spells," he said, tales of medieval magic revolved around things like a magical communion wafer that made everyone who touched it stick to it. Or someone might cut down a tree and — gasp! — find another tree inside of it.

Witches were considered a danger, but even their powers tended to be surreal: For instance, women accused of being witches were blamed for removing men's genitals and sending the organs to perch in trees like X-rated birds.

Dragons were perhaps the biggest disappointment of all, Pyrdum said. They were not the undefeatable fire-breathers of "Game of Thrones."

"The idea seems to be that all you had to do to a dragon was to tell it that it no longer had power because Christ had come and the Christians were in charge," Pyrdum said. "Then, the dragon just had to go, 'OK,' and leave like, 'I was hoping you wouldn't mention the Christ thing.'"

Beowulf, the Old English epic poem, may have been told as a tale of the horrors that occurred before Christian times, when people had to fight monsters instead of sending them away, Pyrdum said.

The pervasiveness of a major religion in all aspects of life is what "Game of Thrones" and most fantasy epics leave out of their Middle Age-style worlds, he said.

"The thing that always strikes me is, these people don't seem to be that interested in religion," Pyrdum said of fantasy authors. "When I see a fantasy work, they seem to be modern people stuck with medieval technology … It's hard to separate the medieval world from the presence of the church." [8 Ways Religion Impacts Your Life]

Indeed, both Christian and Muslim armies were full of believers, DeVries said. Without that aspect of overwhelming religion, he said, "you can't really get the same exact feeling of what it would have been like to be in the Middle Ages and fight similar wars."