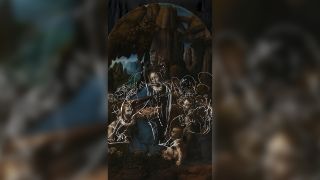 Researchers have uncovered new details of a hidden image buried within Leonardo da Vinci's painting "The Virgin of the Rocks."

Back in 2005, imaging revealed the painting — which shows the virgin Mary, baby Jesus and baby Saint John the Baptist —  nearly had a different composition, according to The National Gallery in London, which is hosting the artwork. Researchers detected tracings of a covered-over underpainting, which put Mary's eye in a different place, among other differences from the final product.

Now, higher-quality imaging has revealed that underpainting in more detail, the gallery announced. Unseen early brush strokes show that the artist originally positioned Mary on the left side of the image, facing baby Jesus and an angel on the right. Da Vinci's original composition was significantly rotated compared with the painting he eventually produced, new images reveal.

It's unclear why da Vinci decided to cover up and redo his original composition, the gallery noted in its statement. But this was his second version of this scene, painted after selling the first (now in the Louvre in Paris) to a private client during a dispute with the church for which it was intended. His covered-up composition represented a significant departure from the first painting, while the final version (which he did sell to the church) is much closer.

"This second version is no mere reproduction, however," the gallery said in a statement. "Along with significant adjustments to the figures, he also uses this version to explore new kinds of lighting effects based on his own research into optics and the physiology of human vision."

To reveal the underpaint, the researchers combined three techniques: The first was infrared reflectography, which revealed the presence of an underpainting in 2005. That technique uses infrared light to see brushstrokes covered by so many overlayers of paint they are invisible in the visible spectrum, but not the infrared.

The second was X-ray fluorescence (XRF) scanning, a technique that, according to the University of Missouri, researchers use to identify individual elements that sparkle when bombarded with X-ray light. The early drawings, according to the gallery, were made with a substance containing zinc that was visible to XRF.

The third technique was hyperspectral imaging, which, according to The Journal of Biomedical Optics, detects the electromagnetic energy coming off its subject across spectra in order to reveal details not detectable in any single spectrum.

The gallery said that more details may yet be revealed, as data processing from the images is ongoing. The images of the underpainting, along with the painting itself, will appear at an exhibition at the gallery Nov. 9 to Jan. 12, 2020, according to the museum.