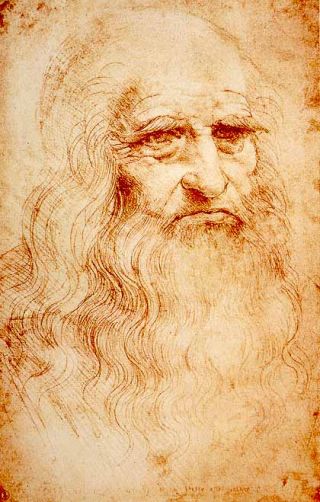 You may think you've heard all there is to know about the famed Renaissance man who painted the "Mona Lisa" and awed the world with sketches of flying machines. But chances are, there are a few little-known facts about Leonardo da Vinci's life that may surprise you.

When da Vinci died in 1519, he left behind more than 6,000 journal pages filled with his personal musings, grocery lists and bawdy jokes. He also detailed his sources of inspiration, his desire for lasting fame and his deeply felt heartaches.

All of these sentiments form the basis for "Inside the Mind of Leonardo," a new film about the artist and inventor that debuts in New York City on Friday (Dec. 19). Played by Scottish actor Peter Capaldi (who also plays The Doctor in the new version of the TV series "Doctor Who"), the film's da Vinci reads aloud from the pages of these journals, revealing the deepest secrets of the original Renaissance man. [Anatomy Meets Art: Da Vinci's Drawings]

Here are some interesting facts about da Vinci's life.

Da Vinci was born in 1452 near Vinci, in what is now the Italian region of Tuscany. By most accounts, his father was a notary and landlord named Messer Piero Fruosino di Antonio da Vinci. His mother, Caterina, is commonly believed to have been a local peasant. However, some experts believe that Caterina was actually a slave owned by Messer Piero.

Da Vinci's parents never married each other. The young da Vinci lived with his mother until he was 5 years old and later moved into the home of his father, who had married another woman.

The artist's journals show that he maintained a somewhat distant relationship with his mother throughout his adult life, exchanging letters with her only from time to time. His writings suggest a closer connection with his father, whose death da Vinci mourned deeply.

Unlike other well-known Renaissance artists, da Vinci never received any kind of formal education. He did, however, receive instruction at home in subjects such as reading, writing and mathematics.

Growing up in rural Tuscany, da Vinci spent much of his time outdoors, where he marveled at the natural world. His journals indicate that he had an especially ardent interest in the properties of water, as well as the movements of birds of prey. In fact, the artist recorded that his earliest memory was of a dream in which a bird of prey landed on his face and pushed its tail feathers between his lips.

It wasn't until his teenage years that the budding artist was sent to Florence to serve as an apprentice for Andrea del Verrocchio, a prominent Florentine painter. And it didn't take long for the student to become the master. Rumor has it that after da Vinci painted one of the angels in Verrocchio's work "The Baptism of Christ," the much more experienced artist was so humbled by the young man's talent that he vowed never to paint again.

Many of his works are unfinished.

Da Vinci was a notoriously slow painter, and many of his works were never finished. In addition to housing the famed (and finished) "Mona Lisa," the Louvre in Paris is home to "The Virgin and Child with St. Anne," an unfinished painting depicting the Virgin Mary, an infant Jesus and Mary's mother, St. Anne.

Hanging in one of the Vatican Museums is "St. Jerome in the Wilderness," another unfinished da Vinci painting — this one portraying the hermitic St. Jerome and his companion, a tamed lion. [Leonardo Da Vinci's 10 Best Ideas]

Perhaps the most intriguing of da Vinci's unfinished works is his painting "The Adoration of the Magi," which allegedly features a depiction of the young artist himself. The painting, left incomplete in 1481, has been held at the Uffizi Gallery in Florence, Italy, since 1670.

In addition to these unfinished paintings, da Vinci left behind many unfinished inventions. In fact, there's no evidence that any of the artist's inventions were ever built. Similarly, none of his writings were ever published during his lifetime.

When da Vinci was 24 years old, he was arrested along with several male companions on charges of sodomy. When no witnesses came forward to testify against the artist and his friends, the charges were dropped. But da Vinci's journals suggest that the allegations were somewhat devastating to a man who liked to keep his private life private.

Da Vinci may also have been scared for his life. In 15th century Florence, sodomy was a crime punishable by death. Not long after his case was dismissed, the artist left Florence for Milan.

He had a militant side

After abandoning his patrons in Florence to start afresh in Milan, da Vinci needed to drum up new business. His strategy was to ingratiate himself to Ludovico Sforza, the Duke of Milan.

Under Sforza, da Vinci was commissioned to create what would have been the crowning achievement of his artistic career: a giant bronze statue of a horse. The project was abandoned when France invaded Italy at the turn of the 15th century.

But a giant warhorse wasn't all that da Vinci had planned for the Duke of Milan. Upon offering himself to the House of Sforza, he set forth his plans to build numerous "war devices." Included in da Vinci's sketchbooks are plans for cannons, smoke machines, portable bridges and even armored vehicles.

Like his flying machine, however, there is no evidence that any of these war machines were ever constructed.