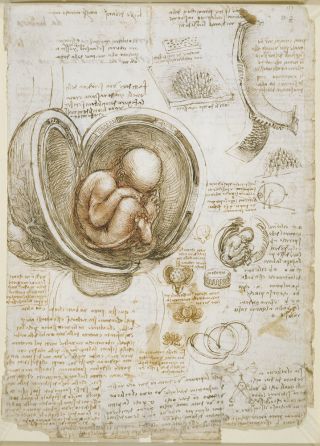 That's probably because Leonardo had a tough time finding female corpses to dissect, explains Peter Abrahams, a practicing physician at the University of Warwick Medical School in the United Kingdom.

Abrahams, a clinical anatomist, has lent his knowledge to an audio tour of the exhibit of Leonardo's anatomical drawings that opened May 4 in Buckingham Palace.

The Italian Renaissance artist learned anatomy as a way to improve his drawings of the human form, but he also brought a scientist's eye to the discipline.

"He wanted to understand how it worked," Abrahams told LiveScience. "He looked at humans like a mechanic would do. Most of that work is very, very relevant today." [Anatomy Meets Art: Da Vinci's Drawings]

Anatomists in Leonardo's time often dissected unclaimed bodies, such as of drunks and vagrants, and those bodies were more likely to be male, Abrahams said.

"It was definitely harder to get female bodies to dissect, and he didn't have many opportunities," Abrahams said.

By Leonardo's time, few advances in human anatomy had been made since the second-century work by the Roman anatomist Galen, whose discoveries were largely based on animal dissections. Leonardo da Vinci had the advantage of access to human cadavers.

Abrahams says studying them would have been obnoxious work. "It must have been horrible, because they didn't have any form of embalming," he said. "Within two or three days that body decomposes."

Leonardo's sketches reveal a deep understanding of how the body worked, much of it still up-to-date. Modern anatomists have only begun in the last 60 years to look at the muscles and tendons of the finger in the detail that da Vinci did, Abrahams said. Leonardo was the first to draw the human spine with the correct curves. He also came tantalizingly close to understanding how blood moved through the body, a mystery that wouldn't be fully solved until 1628, more than a century after his death.

"In many ways, he was literally 100 years ahead of his time," Abrahams said.

"Some of the drawings of the female pelvis he's tried to extrapolate from animals and not always got it right."

Leonardo almost certainly planned to publish his anatomical drawings, though he never did. Today the papers are owned by the British Royal Collection. They're on display at the Queen's Gallery until early October. Anatomy lovers who can't get to London have the opportunity to download an iPad app of Leonardo's drawings.

Today the field of anatomy revolves around new imaging techniques, such as magnetic resonance imaging (MRI) that allows surgeons to see every detail of a patient's spine before they start operating. Microanatomy, the study of anatomy on a microscopic level, is also an area that would have been out of reach for Leonardo. But the Florentine artist anticipated advances that would come only in the last several decades. His baby-in-utero drawings foresee modern ultrasound, Abrahams said, and his drawings of the anatomy of the shoulder look almost like modern three-dimensional visualization.

"Much of what he did in the way he displayed things actually wasn't really physically possible until 30 or 40 years ago," Abrahams said.