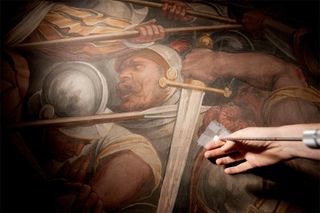 Researchers threaded the endoscope into the wall covered by the Vasari mural to find signs of the lost Leonardo painting "The Battle of Anghiari" in Florence's Palazzo Vecchio.
(Image: © Photo by Dave Yoder)

An engineer by training and now an expert in art diagnostics, Maurizio Seracini may have just hit pay dirt: After more than 30 years of searching for a long-lost Leonardo da Vinci painting, he has evidence the mural has been hiding out on the very wall where it was painted in 1503.

Seracini and his colleagues reported today (March 12) they have chemical evidence the painting may be located behind a more recent mural.

Da Vinci painted the mural "The Battle of Anghiari," which commemorates the 1440 victory of the battle on the plain of Anghiari between Milan and the Italian League led by the Republic of Florence, in the Palazzo Vecchio's Hall of the 500 (the town hall in Florence). Then, in 1563, the painting disappeared, and art historians assumed it had been destroyed when Giorgio Vasari remodeled the hall. Vasari had painted six new murals over the east and west walls of the hall.

New evidence suggests the da Vinci has been veiled by Vasari's mural "The Battle of Marciano."

To see behind the Vasari mural, researchers led by Seracini, a National Geographic fellow, inserted a camera-outfitted probe through six spots, allowing them to view the wall behind the mural and take samples. [Photos of lost da Vinci]

Art restorers with the Italian state art-restoration institute Opificio delle Pietre Dure had chosen the six points of entry because they were free of original Vasari paint, ensuring no damage to that mural from the drilling.

Chemical analyses of the samples suggest the da Vinci painting might exist behind the Vasari. The researchers caution, however, the evidence is not conclusive.

"These data are very encouraging," Seracini, who is the founding director of the University of California, San Diego's (UCSD) Center of Interdisciplinary Science for Art, Architecture and Archaeology (CISA3), said in a statement. "Although we are still in the preliminary stages of the research and there is still a lot of work to be done to solve this mystery, the evidence does suggest that we are searching in the right place."

Supporting their hypothesis of the da Vinci painting's location, Seracini and his team report four lines of evidence:

Seracini's search began in the 1970s, after he noticed the words "cerca trova" (meaning "seek and you shall find") painted in Vasari's fresco and thought it was a clue to the mystery of the lost da Vinci masterpiece. The research effort was led by the National Geographic Society and CISA3, in partnership with the City of Florence.