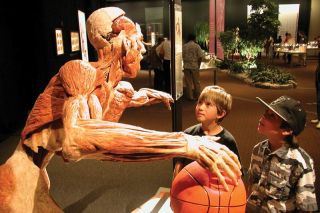 A hall full of human corpses posed as if they were alive hardly seems like a setting for clean family fun. But Body Worlds — a series of exhibits of real, preserved human bodies by German anatomist Gunther von Hagens — is precisely that: a wildly popular museum experience viewed by more than 32 million people worldwidesince 1995.

Despite some controversy, Body Worlds has only grown over the years; there are currently six exhibits open the public worldwide. Another, Body Worlds and the Cycle of Life, focused on aging, is set to open at Chicago's Museum of Science and Industry in March. Jane Desmond, an anthropologist at the University of Illinois at Urbana-Champaign, was in the perfect position to figure out why Body Worlds often fails to offend. For earlier research, Desmond had immersed herself in the world of taxidermy, attending national taxidermy competitions and even getting her taxidermy license.

So it made sense that Desmond would turn her anthropologist's eye to Body Worlds, which has been called "human taxidermy" by critical Catholic bishops. In examining the issues around Body Worlds, Desmond concluded that von Hagens' plastination technique – which replaces bodily fluids with a hard polymer – is actually the "anti-taxidermy." That's because the specimens are all muscle and organs... no skin.

LiveScience talked with Desmond about why skin matters and what it means to put death on display.

In my previous book, "Staging Tourism:  Bodies on Display from Waikiki to Sea World" (University of Chicago Press, 1999), some of the chapters were about performing animals and the importance of movement in our fascination with watching them. After that, I wanted to investigate how we related to dead (taxidermied) animals, ones who appeared to be about to move but never could. Taxidermy, with its implication of "liveness" and its absolute dependence on the death of the animal, seemed so compelling to people that I wanted to understand what presumptions and passions underlay that practice.

You got your taxidermy license so you could attend taxidermy conventions for research. Have you ever done any taxidermy yourself?

No, but I considered training at a formal taxidermy school as part of my anthropological fieldwork. In the end, I decided that I did not want to do that because it might mean that a dead animal would be supplied for me to practice the techniques on at the school. I didn't want to potentially contribute to the death of an animal in order to conduct my fieldwork. Instead, I interviewed a lot of individuals who were practicing taxidermists to further understand their craft and their attitudes. A hall full of taxidermied humans is more "serial killer's lair" than "tourist attraction." Yet millions turn out to see Body Worlds, in which full human bodies are posed and displayed. What's the difference?

You've come right to the heart of the matter! Why would we regard the former as "macabre" and the latter as educational? As I argue in my publications on the exhibitions, I think the removal of the human skin is crucial to the widespread success and popularity of the Body Worlds exhibitions. The bodies, donated to science by individuals prior to death, are transformed into scientific "specimens" both by von Hagens' special "plastination" drying process and through the removal of the skin (and with it markers of age, fitness, social class, racialized status and so on). This distance allows us to approach the exhibit in a "learning" mode, a stance promoted by the design of the exhibit, which invokes the history of anatomy and science in the service of understanding health and illness.    No other series of exhibitions in history has attracted more viewers. With such an astounding phenomenon, we, as social scientists, need to understand what is at stake for those viewers. What does this phenomenon, which is not U.S.-based — but includes exhibits in Japan, Britain and lots of other countries — tell us about various contemporary communities' concepts of death, the dead, and embodied knowledge?

You mention in your writings on Body Worlds that the room containing plasticized fetuses is the only one set aside at these exhibits. These fetuses (and a plastinated pregnant woman with her fetus exposed) also seem to draw the most emotional responses from viewers. Why do you think that is?

Some viewers early on in the series of Body Worlds exhibits a few years ago in Europe protested against the exhibition of a pregnant woman with a fetus in her belly. The woman had died during her pregnancy and the fetus could not survive outside her womb. She had given her permission for the use of her body after death.   My sense is that this is an exhibit which could not sustain its status as a scientific "specimen." For one thing, the fetus still had skin, and for many it was not possible to encounter the exhibit without confronting the death of that well-developed being in the womb. For the other bodies of the adults on display, without skin, the distance of the scientific gaze, which the whole exhibit is set up to evoke, worked, and no protests took place.

Gunther von Hagens has been quoted saying that Body Worlds helps people confront and embrace death. Do you agree?

I agree that that may be one of his goals. However, I think the exhibits are more about living, about how our bodies -- beneath the skin, our bodies which we never get to see from the inside out — are so complex and so incredibly multi-functional.

At the same time, the plastination process, which makes the displays possible, simultaneously banishes the pliability of our bodies, their smells and their viscosity. The bodies, as "specimens" in the exhibits are dry, have no fluids, no fats, no smells, no movement, and no real eyes (artificial eyes are inserted into the faces). The "livingness" of these bodies is long gone, and as such as I looked at the exhibit I found myself mostly unaware of being surrounded by the dead or by death. Judging from viewer comments in the comment books at the exhibits, most shared this opinion. In that sense I do not think the exhibit helps us confront our own mortality or those of our loved ones in a meaningful way. [Read: Why Eyes Are So Alluring]

You've taken an anthropological approach to both taxidermy and Body Worlds. How do you feel about these subjects on a personal level? Do you have a deer head hanging over your mantle? Would you recommend Body Worlds as a fun weekend activity?

Even after researching it for a long time, and trying to understand it as a social practice, I still find taxidermy eerily compelling. I also find it immeasurably sad. Why do we want to kill animals to then resurrect them to a lifelike stance in order to look at them? What are we actually exhibiting? Our mastery over them? Their aesthetic beauty which we cannot see in the wild? If we can come to answer these questions, we can get closer to better grasping the multiple ways in which we relate to animals — as food, as companions, as scientific subjects, as performing animals and so on.

Body Worlds is an incredible series of exhibits. I would recommend seeing one of them, but also I'd suggest having a chance to talk about it with friends and family after. The shows raise so many issues, some of them touched upon here, that it is important to create a space for discussion — and for expressing the deep feelings that it can evoke.