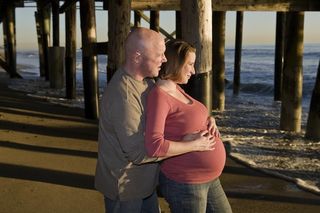 Prospective parents can breathe a sigh of relief: According to the latest research, sex during pregnancy is almost always safe.

The latest primer for physicians on the topic, published today (Jan. 31) in the Canadian Medical Association Journal, advises pregnant women and their partners to engage in sex according to the couple's comfort level. The only exception is in the case of high-risk pregnancies. In those cases, sex may sometimes carry risk, the authors wrote, though the evidence is limited.

"Sex in pregnancy is normal," the researchers wrote. "There are very few proven contraindications and risks to intercourse in low-risk pregnancies, and therefore these patients should be reassured."

Expectant couples often worry that sex will trigger early labor or otherwise harm the fetus. Researchers from Mount Sinai Hospital and the University of Toronto reviewed the research and found that there's no reason to be concerned, unless the pregnancy is already high-risk.

But even in these high-risk cases, few studies provide the evidence needed to make firm guidelines. Studies on sex triggering labor in high-risk women are few and contradictory.

Because the evidence is spotty and the consequences severe, advice to lay off sex may be appropriate when the risk of complications is high, the researchers wrote. Patients should discuss their individual situation with their doctors.

Abstinence "is a simple intervention that causes no harm and may be a reasonable recommendation until better evidence emerges," the researchers wrote.

High-risk situations that could influence the decision to have sex include:

Pre-term labor: Women who are carrying more than one fetus or who have a history of early labor may be at risk for giving birth too soon. Women at low risk of preterm labor can have sex without worrying it might trigger premature birth, the researchers found. In women with a high risk of early delivery, there is "no evidence to suggest a clear benefit" from abstinence, the researchers wrote. But the precaution may still be worth taking, they wrote, given the lack of studies on the topic.

Pelvic Inflammatory Disease (PID): PID is any infection of the uterus, fallopian tubes or other reproductive organs. It can occur after infection with a sexually transmitted disease such as Chlamydia. Pregnancy is no protection against these infections, which can be transmitted to the fetus. In other words, during pregnancy, safe sex is still key.

Placenta previa: In this condition, the placenta grows across the cervix, the opening to the uterus. Theoretically, a penis, finger or sex toy bumping against the placenta could lead to bleeding and even hemorrhage.

There's very little data to either support or refute the theory, the researchers wrote. For women with placenta previa, the advice to abstain is "probably safest," they concluded.

Venous air embolism: Pregnant women should be sure that their partner does not blow air directly into the vagina during oral sex, as a sudden burst of air can reach the woman's bloodstream in utero and block a blood vessel. This condition, called an air embolism, can be fatal to both mother and fetus.