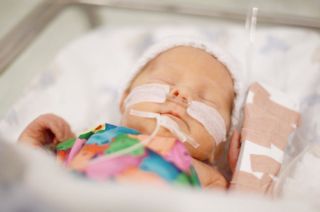 More than half a million babies are born early in the United States, putting them at risk for conditions such as respiratory disorders, blindness, and learning disabilities.
(Image: © dreamstime)

After rising for 16 years, the rate of premature births in the United States dropped for the second year in a row, according to a report released this month. Despite the good news, still more than half a million babies are born early in the country, putting them at risk for conditions such as respiratory disorders, blindness, and learning disabilities.

While recent medical advancements mean most preemies will survive, preventing early birth in the first place is a different story. Doctors have no way of knowing which pregnancies will be preterm, and in about half of all cases, they don't know why a mother delivers early. However, science is beginning to divulge some clues, such as social stress, bacterial infection and hereditary influences, which might be tied to early births.

In many cases, the cause of premature birth is likely a complex interplay between the mother, the fetus, and their respective environments. Adding difficultly to the situation is the fact that scientists don't completely understand what sets off any type of labor, full-term or preterm. But modern research tools could help to uncover specific genes and other components involved in labor that might help us understand what triggers early delivery, said Dr. Louis Muglia, professor of Pediatrics and vice chair for Research Affairs in the Vanderbilt University School of Medicine's Department of Pediatrics, in Nashville.

"I think there are a number of studies, that are just starting to be revealed, that are hopefully going to lead to new insights about the birth process," Muglia said.

Normal pregnancies last around nine months, or between 38 and 42 weeks. A pregnancy is considered preterm if the baby is born at 37 weeks or earlier.

While full-term babies are completely dependent on mom and dad for feeding and diaper-changing, that dependency is taken to an extreme for preemies. The organs and physiological systems of the little fetuses are not completely formed, and when they get cut off from mom's umbilical cord too soon, their systems aren't ready to go solo.

For instance, a lot of brain development happens before 39 weeks, so even the so-called "late-preterm" baby born between 34 and 36 weeks is at risk for learning problems. (The brain at 35 weeks weighs only two-thirds of what it will weigh at full-term, according to the U.S. March of Dimes, an organization that aims to prevent premature birth, birth defects and infant mortality.)

From 1990 to 2006, the premature birth rate in the United States rose by more than 20 percent. This rise is due, in part, to an increase in induced labors and C-sections. Doctors sometimes need to induce labor because of complications with the pregnancy, like preeclampsia (high blood pressure during pregnancy). Such situations account for 25 percent of all premature births in the United States.

In a few other situations, doctors can likely explain why a mother gave birth early, for instance, if she is carrying twins or some set of multiples. But for those 50 percent that can't be explained, scientists have pieced together possible culprits. These include:

Pathogenic infections are one of the lead suspects for causing preterm birth. In fact, they could account for about 25 percent of all unexplained premature deliveries, Muglia said.

This might happen because the mom's immune response that's fighting the infection creates a hostile environment for the fetus, prompting early delivery, said Dr. Diane Ashton, the deputy medical director at the March of Dimes.

And from an evolutionary perspective, it makes sense to give birth prematurely if the infection might harm either the mother or the unborn infant.

"The risk of having a growing infection puts the mom's life certainly in jeopardy, if it was a severe infection, and also it wouldvery much influence the fetus," Muglia said. "It seems like the most evolutionarily advantageous solution would be to deliver the one pregnancy early and then have the capacity to have a subsequent pregnancy."

Bacterial infections in the reproductive areas, like the amniotic fluid or the vagina, might pose such a threat. But the infection could also be farther away, like in the mouth. Many studies have tied periodontal diseases, such as gingivitis, to preterm birth. However, treating these diseases does not appear to reduce the risk of early delivery.

So if getting rid of infections doesn't help, what's going on?

One idea is that, by the time a woman shows symptoms of a disease like gingivitis while she's pregnant, it's too late to treat it in terms of preventing labor, Ashton said.

An unknown pathogen could also be to blame.

"There are many organisms that we can't culture, or may activate the immune system in more subtle ways that don’t have overt evidence of the mom having an infection," Muglia said.

Muglia added, "Maybe it's not those primary infections, but it's something about the maternal immune system interacting with the microbes that is slightly different in those women that augments their risk for preterm birth."

Hereditary factors, or the mother's genes, are also thought to play a role. They're suspected partly because prematurity seems to run in families.

Research in this area is very preliminary, but scientists have pinpointed a few possible players, including genes involved in making the amniotic sac where the fetus grows. "Different genetic expressions cause that amniotic sac to be weakened and more susceptible to rupture," which in turn increases the risk of premature delivery, Ashton said.

Another possible culprit: genes involved in the immune system, specifically, the ones that promote inflammation in the body, which is sometimes triggered by infection. Inflammation in general is thought to be involved in any type of labor, but it's not clear if it relates to the timing of birth, Muglia said.

In February of this year, scientists from the National Institutes of Health announced they had identified genes in both the mother's and the fetus's immune system that increased the risk of premature birth, suggesting that it's not the mother's genes alone that lead to early delivery.

Genetic variations could also make some women's immune systems more sensitive so that a specific infection might activate an immune response in one woman but not another, Muglia said.

Beyond biology, environmental factors such as eating and drinking habits, stress and a person's income appear to influence delivery time.

Smoking, alcohol consumption, drug use, high levels of psychological or physical stress during pregnancy, and improper prenatal care increase the risk of preterm birth. Also, certain medical conditions, such as being underweight, having diabetes, or being pregnant six to 18 months following a previous pregnancy might raise the risk, according to the March of Dimes.

Women in high poverty areas also have a higher risk of delivery early. This association is likely due to a number of factors, such as limited access to health care, or that concerns about housing and employment take priority over health, Ashton said.

Currently, there aren't good animal models for studying human labor, Muglia said. "The things we know lead to birth in mice and sheep and other animals don’t behave the same way in humans," he said.

And scientists obviously can't interfere with human pregnancies in order to study them. But they might be able to learn much more by analyzing the genes of pregnant women, a feat made possible through modern human genome sequencing technologies.

A few big studies looking into the genetics of preterm birth are in the process of being completed, and should yield some results within the next year, Muglia said.

Also, scientists can apply that same technology to better understand how infections could trigger labor. For instance, scientists might miss certain bacterial species if they simply tried to grow them using traditional methods. But these elusive bacteria can be more easily spotted by sequencing their genes, Muglia said.

Once scientists know what's involved in the normal birth process, then they can delve deeper into how things might go wrong with early or late deliveries.