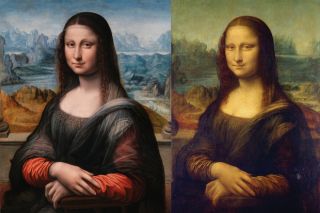 In 2012, scientists discovered that beneath layers of black paint, a seemingly insignificant "knock-off" of the "Mona Lisa" in the Museo del Prado in Madrid was in actuality very close to the original hanging in the Louvre Museum in Paris, revealing the same subject with the same mountain landscape background. That painting may have been painted by Da Vinci or possibly one of his students.

"When I first perceived the two paintings side by side, it was very obvious for me that there is a very small but evident difference in perspectives," study researcher Claus-Christian Carbon of the University of Bamberg in Germany wrote in an email to Live Science. "Maybe the view of a perceptual psychologist is highly sensitive for such tiny differences, but it is very clear that also persons who are not so strongly involved in perceptual sciences can see it easily after having received information on the change in perspective." [See Images of "Mona Lisa" Paintings in 3D]

Turns out, the real "Mona Lisa," or "La Gioconda," and the Prado cousin were painted from slightly different perspectives. Carbon and Vera Hesslinger of Germany's University of Mainz figured out this perspective shift by looking at so-called trajectories, or the paths from a distinctive point on the source, such as the tip of Mona Lisa's nose, to a target, or the observer's (or painter's) eyes. The scientists also asked people to estimate the perspective of the "Mona Lisa" sitter, something Carbon called a psychological assessment of the perspective.

The researchers then could recalculate the position the painters took relative to each other and to the "Mona Lisa" sitter in Da Vinci's studio. They found that the horizontal difference between the two paintings was about 2.7 inches (69 millimeters), which is close to the average distance between a person's two eyes. (When a person observes an object, each eye sees a slightly different perspective of the object, both of which are sent to the brain and transformed into the three-dimensional representation of the object that we "see.")

From these results, the pair thinks the two paintings form a stereoscopic pair, meaning when viewed together create an impression of depth, a 3D image of the "Mona Lisa."

The finding "is accurate in its analysis of the images and interpretation of a possible intent at a stereoscopic representation of the hands area," Martin Arguin, of the University of Montreal, wrote in an email to Live Science, after looking through Carbon and Hesslinger's journal articles on the subject.

Did Leonardo Da Vinci, and possibly one of his students, intentionally create this stereoscopic pair?

The researchers, of course, can't be sure one way or the other, but Carbon points out that Da Vinci "intensively worked on the 3D issue." In addition, in inventory lists there were hints of the existence of two "Mona Lisa" paintings on his property at the same time, and that he owned colored spectacles, Carbon said. [Leonardo Da Vinci's 10 Best Ideas]

This evidence "might indicate that he did not only [think] about the 3D issue theoretically but in a very practical sense in terms of experiments," Carbon added. Also, when looking at the original colors of the two paintings the only real difference was in the sleeves, in which they are reddish in one version and greenish in the other. "This could be a hint to Leonardo’s approach to look at the two La Giocondas through red-green (red-cyan) spectacles," he said, similar to those one might don to watch a 3D movie.

"Still, despite all these indications, we have not found final proof for our hypothesis," he said.

Others suggest the evidence isn't there for an intentional creation of a stereoscopic view for paintings.

For instance, the disparities between the two paintings for other areas of the body, not the hands, don't fit with them creating a stereoscopic pair, according to Arguin. "Most in contradiction with this notion is the fact that these disparities are largely oriented vertically, and not horizontally as would be required to replicate the left and right eye views," Arguin said.

He gave an example of Mona Lisa's face: "All the landmark location changes are of the same size. This would not be so in an adequate stereoscopic image since disparities should vary according to relief (i.e. distance from the observer)."

Arguin added of the study: "They are quite accurate in their statements, and their discussion of their findings is sensible and interesting."

Carbon and Hesslinger say they agree with Arguin's comments about the consistency of disparities in certain regions of the "Mona Lisa" paintings and the horizontal or vertical nature of some of the disparities between the two paintings.

"Ideally we need horizontal disparities to create a proper 3D impression, which we mainly revealed for the hands region," Carbon told Live Science. "This is also the reason for having focused on the hands region when reconstructing the 3D image and visualizing the 3D effect."

Carbon added: "As conclusion we would like to qualify the stereoscopic properties of this region 'remarkable' and 'intriguing,' particularly when we take into account that the base pictures stem from the very early years of the 16th century."

Editor's Note: This article was updated to add responses from Carbon and Hesslinger to Arguin's comments.