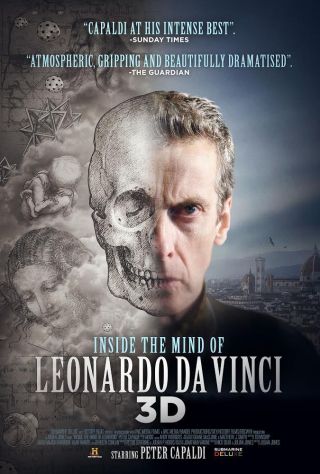 The official movie poster for the new da Vinci biopic, "Inside the Mind of Leonardo."
(Image: © Submarine Deluxe Films)

NEW YORK — You might expect a movie about the great Renaissance painter and inventor, Leonardo da Vinci, to star an old man with a white beard, bedecked in scholarly-looking robes. But that's not what you'll see in "Inside the Mind of Leonardo," a new biopic about da Vinci's life and works.

The film, which opens in select theaters in the United States on Friday (Dec. 19), stars Peter Capaldi — the Scottish actor best known as the newest incarnation of the Doctor in the popular TV series "Dr. Who." Throughout the movie, Capaldi wears simple, modern clothes (with no trace of a long, white beard), yet he still manages to transform himself into the medieval genius.

Shot in 3D, the film centers on da Vinci's obsession with movement — from the flapping of a hawk's wings to the cascading water of a mountain stream. Da Vinci pondered the mechanics of such movements in more than 6,000 pages of writing and sketches that have been preserved for centuries in museums across Europe. He also studied the movement of his own life, documenting his thoughts on different cities, society and the nature of life and death. [5 Things You Probably Didn't Know About Leonardo da Vinci]

The film begins in Tuscany, da Vinci's birthplace and childhood home. It is here that the audience learns about da Vinci's humble early beginnings. We learn that his mother was an unmarried peasant woman named Caterina. His father was a notary and landlord who, after Leonardo's birth, married another woman. Da Vinci was therefore an illegitimate child, a condition that carried a significant stigma in the 15th century.

The young da Vinci spent most of his childhood at his father's Tuscan estate, preferring the company of nature above all else. The film makes it clear that this time spent in the countryside as a child had a lasting effect on the protagonist, who remained interested in the wonders of the natural world all his life.

In his journals, da Vinci recounted his experiences in and reflections on nature in vivid detail. He noted that one of his earliest memories was of a dream in which a bird of prey landed on his face and pushed its tail feathers between his lips. Da Vinci would go on to study such birds, convinced that if he could understand the mechanics of their flight, he could design a machine that would allow humans to fly.

The film transitions seamlessly from the rolling hills of Tuscany to the busy streets of Florence, where the young artist traveled during his teenage years to serve as an apprentice to Andrea del Verrocchio, a prominent sculptor and painter. It was in Florence that the young artist began his career in earnest, but it was also in this bustling city that da Vinci suffered some of his greatest tribulations.

With theatrical resonance, Capaldi draws the audience into da Vinci's periodic bouts of depression as well as his confusion and grief when he is accused of sodomy in his early 20s. This alleged crime, then punishable by death, is what seemed to have inspired da Vinci to move on from Florence and withdraw into his own mind.

From Florence, the artist traveled to Milan, where he experienced major breakthroughs as an artist and inventor. Commissioned by Ludovico Sforza, then Duke of Milan, to build a lasting monument to the Sforza family, da Vinci planned the construction of a giant bronze horse — the largest horse statue ever created.

But the equine monument wasn't meant to be. At the end of the 15th century, France invaded Italy and the funds allotted to the project were cut off. But even though the Sforza statue was never built, the film devotes a lot of time to telling the story of da Vinci's enthusiastic desire to build some kind of eternal monument.

The overall impression the film gives is that da Vinci, more than anything else, was a mere human. He had incredible ideas, and he was among the most talented artists and creative thinkerswho ever lived. Yet, he was deeply troubled by his own emotions and by public opinion. His greatest desire seems to have been extremely relatable: he wanted to leave his mark upon the world. And as any student of history knows, da Vinci succeeded in that mission.