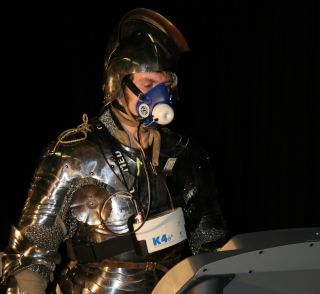 At the gym: A modern re-enactor walks on a treadmill in a full suit of 15th century armor.
(Image: © Graham Askew, University of Leeds)

As if flying arrows and burning pitch weren't enough to worry about, medieval knights also had to battle their own armor.

A new study that put armor-wearing volunteers on treadmills finds that wearing a full suit of armor (which might weigh up to 110 pounds, or 50 kilograms), takes more than twice the energy of walking around unencumbered. Even lugging around a backpack of equal weight is less energy-intensive than wearing armor, the study found, because wearing 17 pounds (8 kg) of steel plates on each leg requires no small amount of extra exertion.

On occasion, armor's weight may have turned the tides of battles, said lead study researcher Graham Askew of the University of Leeds. In 1415, heavily armored French knights advanced across a muddy field toward a lightly armored English force in the Battle of Agincourt.

"By the time they advanced across the field, they would have been exhausted," Askew told LiveScience. "It's possibly one of the reasons why the French lost, despite there being many, many more French soldiers than there were English."

Knights on a treadmill

Like many casual museum-goers, Askew, a biomechanics researcher, became curious about how medieval knights moved around after seeing suits of armor on display. Unlike most museum visitors, however, Askew had an opportunity to answer the question using hard numbers.

He and his colleagues recruited four volunteers, historical re-enactors who were accustomed to wearing their own sets of replica 15th-century armor. Each man agreed to walk and run on a treadmill (a task Askew called, "very clanky") while wearing a breathing mask to measure how much oxygen they took in and how much carbon dioxide they excelled, as well as their breathing rate. These measurements allowed the researchers to calculate the energy they used during the exercise periods.

The modern-day knights used 2.1 to 2.3 times more energy walking with their armor on compared with walking without it. Running with armor took 1.9 times the energy as running armor-free.

The result, Askew said, is that men in armor end up moving much more slowly than men without armor. This effect is only exacerbated with age: At his maximum aerobic capacity, an average 38-year-old man could cover about 5.5 feet (1.7 meters) per second, compared with 8.8 feet (2.7 m) per second for an unarmored 38-year-old. With a maximum walking speed of 4.6 feet (1.4 m) per second, an armored 55-year-old would have trouble keeping up.

Few people face the occupational hazards of medieval knights today, Askew said, with the possible exception of bomb disposal experts, who wear full-body protective suits that are also very heavy. But the study could be of help to historians trying to understand the outcomes of ancient battles, Askew said. [Top 10 Battles for Control of Iraq ]

The research also gives a hint into how fit the knights of old must have been. Although modern soldiers lug around equipment as heavy as a knight's armor, Askew said, they expend less energy doing so because their legs are unencumbered.

"It requires a great deal of physical exertion to even perform a medium-speed walk in a suit of armor," Askew said. "I certainly don't think you'd be able to put on a suit of armor and walk around with it without suffering quite badly if you weren't used to it."

The study appears today (July 19) in the journal Proceedings of the Royal Society B.