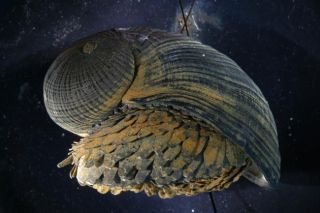 A snail's shell that protects it from attacks underwater could provide clues for designing improved body armor to guard human soldiers, a new study suggests.

The research involved an unusual sea snail, the so-called "scaly-foot" snail which was first reported in 2003 and makes its home in the harsh environment of a deep-sea hydrothermal vent in the Indian Ocean. Past studies of the  snail, a type of sea mollusk, revealed its foot was covered in plates of iron-sulfide minerals, and it is now the only known animal today to employ iron sulfides as a structural material.

Like other snails, this one also sports a shell covering its body. Although hard, a typical snail's shell will fracture if persistently squeezed by a predatory crab. Hoping to learn exactly how the scaly-foot snail's shell is designed to resist such crushing, the authors took a close look at the shell's structure, examining it on the nanoscale.

They saw that shell is composed of three layers: a hard outer layer that contains iron sulfides, similar to the ones identified in its foot scales; a more supple middle layer made of organic material; and a stiff inner layer with a large amount of calcium minerals. This arrangement of "rigid-compliant-rigid" layers creates a trilayer, sandwich structure unique to this snail, the researchers say.

After figuring out the shell's structure, the team used a computer model to simulate how the shell faired when subjected to a penetrating force, similar in strength to the pinching of a crab's claws.

"Each layer does something differently," said lead researcher Christine Ortiz, a materials science and engineering professor at the MIT.

The hard outer layer contains small, grain-like particles. When under attack, these granules help to dispel the energy of the blow, spreading it out across the outer region. Any fractures that occur will disperse along jagged lines guided by the granules, forming fissures in the top layer.

The softer middle layer helps protect the brittle inner layer from cracking, Ortiz explained. And the inner layer itself protects the snail's body from injury. Since this inner layer is rigid, it doesn't displace into the animal's body during an assault, which could cause blunt trauma, Ortiz said.

Put together, the three layers work to help prevent penetration of the shell and also withstand bending.

The outer and middle layers also help the snail to survive in the extreme environment characteristic of hydrothermal vents, since these layers are resistant to dissolving in the highly acidic waters.  And the middle layer protects the snail from temperature changes at the vents.

The shell's structure may one day inspire new and better designs for human protective equipment, from body armor to sporting gear. The three-layer arrangement and curved surface give the shell stability and penetration resistance, highly valued characteristics of materials used for armor, Ortiz said.

Automobiles painted with an iron-based, granular coating similar to the one found in the shell's outer layer could dissipate energy in the same way the shell does when undergoing a predator attack.

However, any bio-inspired design would likely not use the exact same materials found in the snail's shell, which has flaws of its own. Scientists would simply use it as a guide, and improve upon the shells shortcomings.

"Nature only uses what's available to it," said Ortiz. Engineers might use a similar design, but replace some of the components with high performance structural, or ballistic materials, she said.

The results were published online Jan. 18 in the journal Proceedings of the National Academy of Sciences.