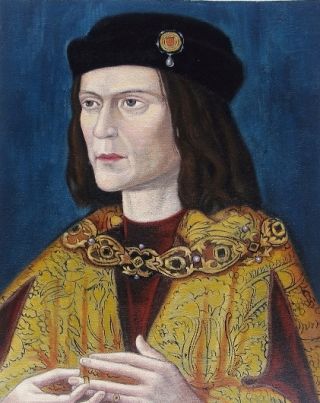 In his play "Richard III," Shakespeare depicted the king as a deformed killer and an evil tyrant. As this was well before the age of 24-hour news and Twitter, it was the ultimate negative press of its time. While some elements of the play are grounded in fact, Shakespeare also took some artistic license, as the play was written more than 100 years after the king’s death and there was no one still alive who had known Richard III. Here are some of the facts and myths about Richard III.

The boy who would become Richard III was born in England on Oct. 2, 1452. He was the youngest surviving son of Richard Plantagenet, 3rd Duke of York, and his wife, Cecily Neville. There was not a high expectation that he was going to rise to fame — or infamy — based on his fairly quiet first years in Northamptonshire, England.

Richard's life changed at an early age when his family, the House of York, waged the War of the Roses against the Lancastrians to gain control of the country. Richard's father, an uncle and a brother died in a December 1460 battle.

Another of Richard's brothers, Edward, ultimately defeated Henry VI and his Lancastrian supporters the following February. Young Richard became a prince when his brother took the crown as Edward IV in 1461. Ultimately, Richard assumed the title Duke of Gloucester.

The War of the Roses resumed again in 1469. Richard was involved in many key battles and was wounded. Edward IV lost power briefly in 1470 but his forces were ultimately victorious.

Richard was able to enjoy the spoils of victory, marrying Anne Neville, the daughter of the Earl of Warwick, and gaining access to the family’s immense fortune. Richard and Anne’s only child, a son named Edward, was born around 1476, but he died at a young age, and Anne soon followed.

In the 1480s, the future king went into battle again, assisting his brother to invade Scotland. His strong performance in this conflict bolstered his stature and fueled his rise to power.

Richard's nephew, Edward V, took over when his father, King Edward IV, died in 1483. Edward V was only 12 years old when he became king. In a power grab, Richard locked Edward V and his younger brother, Richard, in the Tower of London in May 1483. Richard has been accused of having his nephews murdered, but historians debate the boys' fate. It is possible that they died imprisoned in the tower but were not killed.

Lord Hastings, a trusted adviser to Edward IV, was executed on charges of treason, completing Richard’s power grab; he became king on July 6, 1483.

While serving as king for just two years, Richard III championed some principles of justice that still guide legal systems of today. He proclaimed that laws had to be administered impartially and justice had to be meted out quickly. He also established the concept that everyone had the right to be represented by a lawyer regardless of his or her ability to pay.

Richard III relished his role as a warrior and he ultimately died in battle. He was killed on Aug. 22, 1485, by the forces of Henry Tudor at the Battle of Bosworth Field. He was not treated regally in death, and is the only king who didn’t have a tomb. His remains were recently unearthed in a parking lot in Leicester, England.

Some of the biggest myths surrounding Richard III are related to his appearance. While Shakespeare's play portrays him as having an emaciated arm and a hunchback, historians have not uncovered any solid evidence of physical deformities. A portrait that is part of the official royal collection shows him with uneven shoulders, but there are indications that it — along with other portraits — was altered after completion to conform to that image.

While it was once widely believed that Richard III murdered Edward, the Lancastrian Prince of Wales, there are reference materials that describe Edward as being killed on the field of battle in Tewkesbury.

While the Shakespeare play has Richard III declaring "… for I did kill King Henry …," Henry VI died in the Tower of London on May 21, 1471, most likely at the orders of Richard III's brother, Edward IV.

The Shakespeare play also fingers Richard III for the execution of his brother George, Duke of Clarence, but there is no evidence of his involvement. However, there was bad blood between brothers King Edward IV and George, and documents indicate that Edward had him executed for treason.

While in the play Richard III is portrayed as forcing his wife, Anne Neville, into marriage and then poisoning her, there is speculation that their marriage was loving, and there is evidence that she suffered from a serious disease, possibly tuberculosis.

While Richard III is often painted as cold-hearted tyrant, he was also shown to be a lover of literature, music, architecture and education, in particular financing the chapel at King's College, Cambridge University, and supporting other collegiate churches.