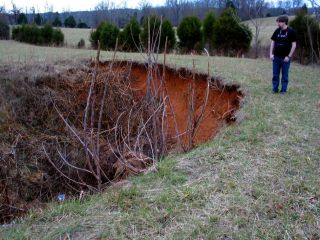 Located in Green County, east of Bowling Green, Ky., this sinkhole formed about eight years ago; the owners of the farmland where it formed have since pushed old hay rolls into the hole, where a tree has already begun to grow. The walls of the sinkhole are a rich, rusty color, characteristic of the reddish-brown colored silt and dark red clay of central Kentucky's soil.
(Image: © Maria Johnson)

They've swallowed Corvettes in Kentucky, condos in Florida and homes in Texas. Clearly, sinkholes are not to be sneezed at. But what causes these collapses of supposedly solid ground?

Sinkholes are pits in the ground that form in areas where water gathers without external drainage, according to the U.S. Geological Survey. As water drains below ground, it can dissolve subterranean caverns, particularly in areas where the bedrock is made of water-soluble evaporate rocks such as salt or gypsum or of carbonate rocks such as limestone or dolomite.

Most of the time, sinkholes form gradually. Occasionally, though, the collapse is sudden. Those sudden sinkholes are often the ones that open up and swallow cars, homes and streets. [In Photos: Stunning Sinkholes]

Geologists divide sinkholes into three types. The first is a dissolution or solution sinkhole. In this type of sinkhole, there is little soil or vegetation over the limestone or other bedrock. Water from rain and runoff slowly trickles through crevices in the bedrock, dissolving it. As a result, a depression gradually forms. Dissolution sinkholes sometimes become ponds if the depression gets lined with debris, trapping water inside. Dissolution sinkholes happen slowly and are generally not dangerous, but one that becomes a pond can drain suddenly if water makes it through the protective bottom layer.

The most dangerous type of sinkhole is a cover-collapse sinkhole. In these cases, the bedrock is covered by a layer of clay. Beneath this ground cover, however, water dissolves an underground cavern. Gradually, ground sediments begin to erode, or spall, into the cavern from the bottom. The ground continues to crumble from beneath until only a thin layer remains between the surface and the underground opening. When that layer collapses, the sinkhole opens up suddenly, swallowing any structures on top.

Areas with underlying dissolvable rock are most susceptible to sinkholes. According to the USGS, the most dangerous spots are in Florida, Texas, Tennessee, Pennsylvania, Alabama, Missouri and Kentucky.

There are often warning signs before a sinkhole collapse, however. The ground may slump noticeably, causing fence poles or trees to lean. Subsiding soil might also expose buried surfaces of trees or foundations, according to the Suwannee River Water Management District in Florida.

A structure threatened by a sinkhole may show small cracks, and doors and windows may stick or refuse to shut as the structure subtly settles. Circular patches of wilting vegetation or water gathering in small ponds where it never gathered before can also hint that the ground is failing.

An important warning sign is a "chimney hole" or "chimney sinkhole." These are deep vertical holes of varying sizes with steep sides. Florida officials recommend fencing off chimney holes and reporting them to the county.

Sinkholes can be very destructive, but they are rarely deadly. An exception occurred in February 2013, when a sinkhole suddenly opened up under a bedroom in a home in Seffner, Fla., sending Jeffrey Bush, 37, tumbling to his death.

Bush's brother Jeremy Bush attempted to rescue him minutes after the sinkhole opened, but found only a dirt-covered hole 20 feet (6 meters) across. Rescue crews deemed the ground too unstable to recover Jeffrey Bush's body, and also condemned the two homes neighboring the residence.

A less tragic sinkhole opened up in February 2014 in Kentucky, swallowing eight cars at the National Corvette Museum in Bowling Green.

An enormous sinkhole in Louisiana in 2012, the Bayou Corne Sinkhole, created an environmental catastrophe by opening up a natural underground oil reservoir. The pit released not only oil, but also methane and hydrogen sulfide to the surface. About 350 people had to evacuate to escape the toxic gases. That sinkhole was caused by an underground mine collapse. [Dramatic Video: Louisiana Sinkhole Swallows Trees]

An Australian family was shocked in August 2016, when a similar human-influenced sinkhole suddenly opened up in their backyard. The water-filled sinkhole in the town of Ipswich in southeast Queensland was caused by the collapse of an old mine shaft.

Sinkholes can also appear when leaking water or sewer pipes undermine roadways. An investigation by the science news site Phys.org in May 2017 found that urban sinkholes seem to be a growing problem as cash-strapped cities neglect aging infrastructure. In January 2017, for example, a 55,000-pound Hydro-Vac truck sunk into a sinkhole in the parking lot of an auto shop in Oakwood, Georgia. The cause was a crumbling storm drain.

"Blue holes" are water-filled sinkholes in caves or in the ocean. The largest is Pozzo del Merro in Italy, which is at least 1,286 feet (392 m) deep. The Bahamas are home to the deepest Blue Hole with an underwater entrance, Dean's Blue Hole. That sinkhole is 663 feet (202 m) deep.

Blue holes are magnets for tourists, which can cause environmental problems. A 2017 study in the journal Tourism Management found that runoff from the paving of parking lots as well as fuel leakage from visitors' cars contaminated the water-filled sinkholes of Quintana Roo, Mexico, some of which were used by the ancient Mayans as sacrificial pits. Pollution levels rose and fell with the vacation season, the researchers reported.

It's difficult to pinpoint the largest sinkhole in the world — these are unstable and difficult to explore geological features, after all — but a leading candidate is China's "Heavenly Pit," the Xiaozhai Tiankeng. This ancient sinkhole is about 2,170 feet (662 m) deep and 1,760 feet (527 m) wide.