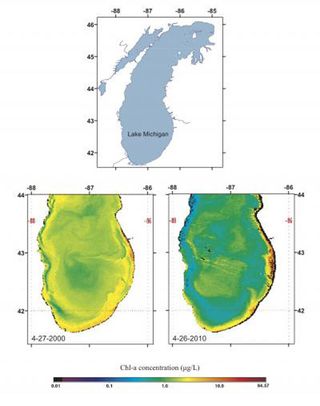 This image shows how the concentration of chlorophyll a, a measure of phytoplankton, has declined significantly (illustrated by shift from to blue) within a large ring of water in southern Lake Michigan.
(Image: © Foad Yousef.)

An invasive species of mussel called quagga has recently begun eating its way through the phytoplankton population of Lake Michigan, which could have dire effects on the lake's ecosystem, scientists now warn.

A giant ring of phytoplankton (microscopic plants such as algae) was discovered in Lake Michigan in 1998 by Michigan Technological Universitybiologist W. Charles Kerfoot and his research team. The "phytoplankton doughnut" is formed when winter storms kick up nutrient-rich sediment along the southeastern shore of the lake. The disturbed sediments begin circulating in a slow-moving circle with the lake's currents, which provides a massive supply of food for phytoplankton.

"We saw that with each storm, you get a ring, and it can persist for weeks or even months," Kerfoot said.

This doughnut, in turn, feeds the entire lake. Zooplankton, tiny animals that feed on phytoplankton, thrive there. The seasonal bloom helps them survive winter. The zooplankton are then eaten by small fish,which are eaten by large fish, and so on — thus the doughnut helps maintain the entire food web.

But almost as soon as it was discovered, the doughnut — recognized bythe signature of the plants' chlorophyll pigment that captures sunlight— started to disappear. "Since 2001, the chlorophyll has been nibbled away on the edges, right where the quaggas are," Kerfoot said.

The quagga is found in all of the Great Lakes; the invasive specieswas introduced by ocean-going vessels dumping ballast water. Their favorite food is phytoplankton. Hank Vanderploeg, a colleague of Kerfoot's, calculated that they consume phytoplankton at a rate that's five to seven times greater than the plants are being produced.

All the energy in the phytoplankton, which once fed fish, is now being sucked down to the bottom of the lake by quaggas. Their waste can stimulate the growth of Cladophora algae, which die, decompose and remove all the oxygen from the surrounding water.

Under such conditions, populations of zooplankton will decline,as will the alewives, chubs, Atlantic salmon, muskies, smelt, walleyes,perch and the rest of the hundred or so species of fish that inhabit Lake Michigan.

"A high percent of the fish biomass could be lost in the next couple years," Kerfoot said.

National Oceanic and Atmospheric Administration scientists have already documented declines in several species. "We have a system that'scrashing," Kerfoot said.