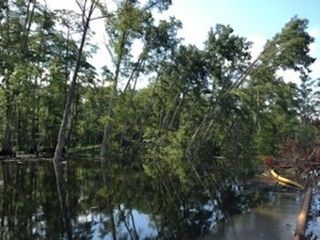 A section of trees show signs of imminent collapse near a sinkhole that opened up in Bayou Corne, La.
(Image: © Assumption Parish Police Jury)

The giant sinkhole in southeastern Louisiana opened in August 2012. An earthquake swarm preceded the water- and chemical-filled crater, which appeared near the northwest edge of the Napoleonville salt dome. The salt dome, a plug-shaped upwelling of salt, was being mined for salt brine by injecting freshwater in wells and extracting the dissolved salt.

Bayou Corne's 350 residents were evacuated from their homes last year and still haven't been allowed to return. The sinkhole is gobbling land, earthquakes continue and the water is laced with hydrocarbons and explosive methane gas from naturally occurring oil and gas deposits. The U.S. Geological Survey and state officials have concluded that the sinkhole formed after an underground mine cavern collapsed. The state of Louisiana has sued Texas Brine, the company that owns the land and was operating the mine, for the environmental damage and cleanup costs.