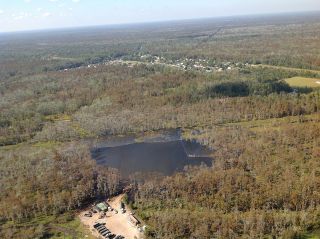 A sinkhole that opened up in Bayou Corne, La., after brine mining created a cavern in a salt done that later collapsed.
(Image: © Assumption Parish Police Jury)

Strong shaking first rattled residents of Bayou Corne on June 8 and July 3 in 2012, prompting officials to install earthquake monitors near the small town. After July 14, seismometers detected 10 to 12 sharp tremors of about magnitude 2.5 jolting the region daily, said Steve Horton, a seismologist at the University of Memphis and lead study author.

The earthquakes originated near the northwest edge of the Napoleonville salt dome, a plug-shaped upwelling of salt that was being mined for brine by injecting freshwater in wells and extracting the dissolved salt, Horton said.

Starting July 24, the seismic activity ramped up to hundreds of quakes, then suddenly stopped on Aug. 2, Horton said. The next day, a water-filled sinkhole appeared in the same spot as the earthquakes. It was about 580 feet (180 meters) wide and 420 feet (128 m) deep.

Horton said it was rare to have earthquakes herald the opening of a sinkhole. "I don't know of another case," he told OurAmazingPlanet.

Government officials now think a cavern in the salt dome, created by brine mining, may have collapsed, causing the sinkhole, according to the U.S. Geological Survey and news reports. Temblors continue to shake Bayou Corne, which remains under mandatory evacuation orders because the sinkhole opened into a natural underground oil reservoir, releasing oil and toxic gases such as methane and hydrogen sulfide.

Louisiana declared a state of emergency and cleanup crews continue to remove hydrocarbons bubbling up to the surface. The seismometers warn when conditions near the still-spreading sinkhole are dangerous for cleanup crews, Horton said.

"There's a lot of seismic activity going on today, so it puts people at risk," he said.