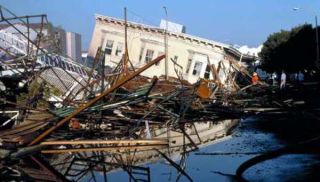 Scientists who weren't in Chile during this morning's aftershocks nevertheless knew the moment the rumbling started, thanks to a global network of quake-detecting instruments called seismographs.

Seismographs are securely mounted to the surface of the Earth, so when the ground starts shaking, the instrument's case moves.

What doesn't move, however, is a suspended mass inside the seismograph, called the seismometer. During an earthquake, the seismometer remains still while the case around it moves with the ground shaking.

Traditionally, the suspended mass was a pendulum, but most modern seismometers work electromagnetically.

A large permanent magnet is used for the mass and the outside case contains numerous coils of fine wire.

Movements of the magnet relative to the case generate small electric signals in the wire, which can be sent to a computer or recorded onto paper to create a seismogram.

Seismographs can detect quakes that are too small for humans to feel. During an earthquake, ground-shaking seismic waves radiate outward from the quake source, called the epicenter.

Different types of seismic waves travel at different speeds and through different parts of the Earth during a quake.

The farther seismic waves get from their source, the weaker they become. A network of interconnected seismographs can quickly pinpoint the source of a quake by measuring differences in the time it takes different seismic waves to reach a detector.

Because seismographs can only measure movement in one direction, many seismograph stations have multiple seismographs to record the north-south, east-west, and vertical motions of the ground.

These measurements allow scientists to estimate the distance, direction, magnitude, and the type of earthquake that just occurred.