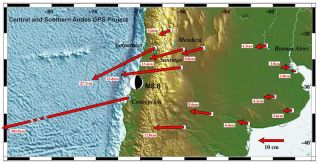 This map, created by Project CAP (Central and Southern Andes GPS Project), shows the displacements of the Earth's crust caused by the Feb. 27 Maule earthquake in Chile.
(Image: © James Foster and Ben Brooks at the University of Hawaii)

The massive 8.8 magnitude earthquake that struck Chile more than a week ago moved the city of Concepción at least 10 feet (3 meters) to the west, seismological measurements indicate.

The violent temblor — the fifth most powerful quake ever measured — shifted other parts of South America as well, from the Falkland Islands (located just east of the southern tip of South America) to Fortaleza, Brazil, situated on that country's northern coast.

The quake occurred off the coast of the Maule region of Chile in one of Earth's seismic hotspots where the Nazca tectonic plate is squeezed under, or subducted below, the neighboring South American plate. Tension builds up as the plates move against each other, and earthquakes such as the one that struck Chile on Feb. 27 relieve these pent-up stresses.

The movements of the Earth during earthquakes can be measured by comparing the precise GPS locations of instruments prior to the quake and then after.

These measurements can help scientists better understand the seismic processes that control earthquakes.

"The Maule earthquake will arguably become one of the, if not the most important great earthquake yet studied. We now have modern, precise instruments to evaluate this event, and because the site abuts a continent, we will be able to obtain dense spatial sampling of the changes it caused," said Ben Brooks of the University of Hawaii and a co-principal investigator of the GPS project in Chile, called the Central and Southern Andes GPS Project, or CAP.

With the GPS measurements, the researchers have constructed a map showing the relative movement of locations after the Maule, Chile, earthquake.

Other movements around South America caused by the earthquake include:

During the 6.9 magnitude 1989 Loma Prieta earthquake, which occurred along the San Andreas Fault in California, the Pacific plate moved 6.2 feet (about 2 m) to the northwest and 4.3 feet (1.3 m) upward over the North American plate.

The CAP program hopes to triple its current network of 25 GPS stations spread across the Central and Southern Andes mountains to get a better picture of the motion and deformation of Earth's crust there.

"By building new stations, the project can monitor the post-seismic deformations that are expected to occur for many years, giving us new insights into the physics of the earthquake process," said Mike Bevis of Ohio State University, who has led the CAP project since 1993 and is currently in Chile doing fieldwork.