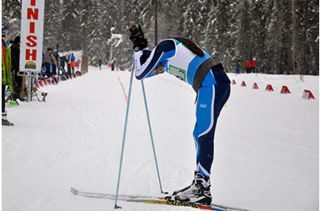 Winter Olympians have a lot to lose in a warming world. Perhaps that's why athletes in Sochi are speaking out about climate change.

Cross-country skier Andy Newell, an American, wrote an open letter this week urging action, citing changes he's seen in his home state of Vermont, according to Scientific American. And a group of Yale students calling themselves "Team Climate" have been speaking to Newell and others about the future of winter.

Bronze medalist skier Hannah Kearney told Team Climate that the glaciers she trains on are shrinking, and Newell complained of inconsistent winters in Vermont. These observations are simply anecdotes that don't prove any long-term climate trends, but the Yale team backs them up with scientific data showing warming temperatures and shrinking snow cover. What's more, a January report by researchers at the University of Waterloo in Canada found that six of the 19 Winter Olympic sites since 1981 no longer have a climate conducive to skiing and slaloming. Sochi itself may be too hot a spot for winter sports within 50 years, the report found.

Will indoor winter sports such as hockey and ice dancing be all that's left for Olympic athletes in a warmer future? Newell and the 105 Olympians who signed his open letter hope not.