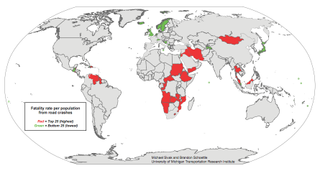 The nations with the most car-accident deaths have been highlighted in a new report.

On average, 18 out of 100,000 people on the planet die in car accidents each year, but that fatality rate varies widely across different countries.

Namibia has the highest car-accident death rate, with 45 people killed on the road out of every 100,000 in the whole population. In the Maldives, meanwhile, just two people die in car crashes out of every 100,000 each year. [List of Countries with Most & Least Car Crash Deaths]

In a map showing the geographic spread of car-crash fatality rates, many of the countries with the highest rates are clustered in Africa while most of the lowest rates are scattered across Europe.

The report released this month comes from the University of Michigan's Transportation Research Initiative and draws on 2008 data from the World Health Organization, stacking car-crash fatality rates against the mortality rates from other leading causes of death such as cancer, heart disease and stroke.

"The results of this study indicate that, in many parts of the world, fatalities from road crashes represent an unexpectedly large proportion of all fatalities," study author Michael Sivak said in an email.

The United Arab Emirates has the highest proportion of fatalities caused by road accidents at 15.9 percent, but its fatality rate from road crashes is relatively low, ranking 32 on the list. This disparity is largely because the UAE has one of the lowest fatalities rates from all causes of death, Sivak and his co-author Brandon Schoettle write in the report. About 155 out of every 100,000 people die each year in the United Arab Emirates, compared with 1,717 out of 100,000 people who die each year in Chad, the country with the highest fatality rate overall.

Still, a low rate of road fatalities can correspond with a low percentage of car-accident deaths. Sweden, the United Kingdom and the Netherlands, for example, have the fourth, fifth, and seventh lowest car-accident fatality rates per 100,000 people, and these three nations also rank among the seven countries with the lowest fatalities from road crashes as a percentage of deaths from all causes.