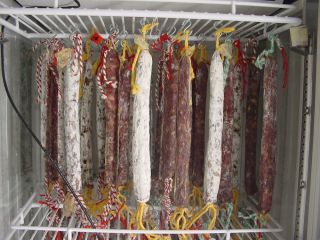 The trick to making sausage healthier may be baby poop, researchers say.

Bacteria from baby poop can help make delicious sausages, which could transform savory meats into health foods much like probiotic yogurts, according to new research.

For millennia, cultures across the globe have relied on microbes to help create a dazzling variety of foods and drinks. The most familiar examples are the yeasts used to make wine, beer and other alcohol.

Bacteria and yeast ferment sugars in foods, generating acids, gases and alcohols. Bread gets its spongy texture from bubbles of carbon dioxide released by fermenting yeast; cheese, pickles and kimchi traditionally often got their sharp taste via fermentation as well.

In addition, many types of sausages — including pepperoni and salami — are made with the aid of bacterial fermentation, which helps give these sausages their characteristic tangy flavor and, in many cases, their chewy texture and intense red color. [Poop Sausage & Pee Drinks: 7 Gross 'Human' Foods]

Fermented sausages are made from mixtures of ground meat, salt, sugar, spices and curing agents stuffed into casings. They are typically fermented by either bacteria naturally found in the raw meat or commercially available bacteria added to the meat during manufacturing. The lactic acid these fermenting bacteria produce, together with the drying of the meat, suppresses the spread of germs that would otherwise spoil the sausages.

In recent years, scientists have discovered that foods such as yogurt that contain live probiotic bacteria can have a wide variety of health benefits. For instance, these microbes could help burn away belly fat, treat depression, lower inflammation, prevent urinary-tract infections and fight infant gastrointestinal disorders such as constipation.

Scientists in Spain reasoned that probiotic bacteria could be used in fermented sausages as well.

"Probiotic fermented sausages will give an opportunity to consumers who don't take dairy products the possibility to include probiotic foods to their diet," said study co-author Anna Jofré, a food microbiologist at Catalonia's Institute of Food and Agricultural Research's (IRTA) food-safety program in Girona, Spain.

For probiotic bacteria to work, they must survive the acids in the digestive tract. As such, the researchers focused on microbes found alive in human feces.

The scientists concentrated on 43 fecal samples of healthy infants up to 6 months old. The samples were taken from diapers, mostly provided by midwives in support groups for new parents.

The two kinds of bacteria used most often in probiotics, Lactobacillus and Bifidobacterium, are far more abundant in infant poop than in adult excrement. In addition, "infant feces are natural samples, easy to obtain," Jofré said.

The scientists tried fermenting six batches of sausages using three strains of bacteria found in baby poop and three other, commercial probiotic strains of bacteria. Studies they had done in the past established the strains they used from infant excrement were safe for people.

Specifically, the investigators made "fuet," a kind of Mediterranean fermented pork sausage commonly found in Catalonia in northeastern Spain. It resembles the Spanish fermented sausage known as "chorizo," although fuet does not contain paprika like chorizo does and is also usually shorter, thinner, less acidic and less fatty. (The sausages the researchers made had no feces in them, only bacteria cultured from the poop.)

Only one of the six strains of bacteria became the main, dominant microbes within the sausages: one of the strains from infant feces. In fact, this strain grew "to levels of 100 million cells per gram of sausage," Jofré said, "enough to produce health-promoting effects to people."

Moreover, professional tasters confirmed all the sausages tasted like regular fuet, even though all were healthier, low-fat, low-salt versions. The scientists detailed their findings in the February issue of the journal Meat Science.

The scientists tried their creations as well.

"We ate them, and they tasted very good," Jofré told LiveScience.

Future research needs to confirm if this strain of bacteria actually has probiotic effects. "Meanwhile, they can be used for the production of tasty fermented sausages," Jofré said.

No companies are currently interested in commercializing these sausages, Jofré noted.