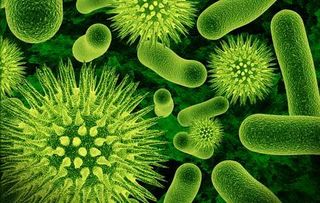 Studies in mice suggest that gut bacteria can influence anxiety and other mental states.
(Image: © Dreamstime)

Providing probiotics, or "good bacteria," to healthy infants shortly after they're born may reduce the development of gastrointestinal disorders and prolonged crying episodes later in life, a new study from Italy suggests.

In the study, newborns that received a daily dose of the probiotic Lactobacillus reuteri had fewer episodes of inconsolable crying (colic), constipation and regurgitation (reflux) at age three months compared to newborns given a placebo.

Use of probiotics also had benefits in terms of reducing health care expenses, such as money spent on emergency department visits, or money lost when parents took time off work. On average, families with infants that took probiotics saved about $119 per child, the researchers said. [5 Ways Gut Bacteria Affect Your Health]

However, more research is needed to confirm the findings before it can be recommended for newborns, experts say. Currently, doctors do not recommend that probiotics be used routinely in infants, said Dr. William Muinos, co-director of the gastroenterology department at Miami Children's Hospital, who was not involved with the study.

And although the treatment was not related to any harmful events in the current study, use of probiotics could potentially pose risks to newborns, Muinos said. For example, the lining of a newborn's intestinal tract is less mature, and more porous, than that of an older child, which could cause some bacteria to seep into the blood stream, Muinos said. This risk will need to be evaluated in future studies, Muinos said.

Infant colic, gastroesophageal reflux and constipation the most common gastrointestinal disorders that require infants to visit the doctor in the first months of life, the researchers said.

In the new study, Dr. Flavia Indrio, of the University of Bari Aldo Moro in Italy, and colleagues randomly assigned 554 infants born at full term to receive either daily drops of Lactobacillus reuteri mixed with oil, or just an oil mixture (the placebo). Neither the parents nor the doctors knew which treatment children received.

Parents were asked to keep diaries recording vomiting episodes, bowel movements and episodes of inconsolable crying, as well as the number of pediatrician visits they made.

The exact reason for the beneficial effect of probiotics in infants is not known, but gut microbes are known to play a role in food absorption, movement of the gut and many other functions, Muinos said.

Because conditions such as colic, constipation and gastroesophageal reflux can be defined in many different ways, future studies of probiotics in infants should clearly specify the criteria that need to be met in order to be diagnosed with these diseases, Muinos said.

And because not all colic is related to gastrointestinal symptoms, probiotics may not always help with the condition, Muinos said

In an editorial accompanying the study, Dr. Bruno Chumpitazi and Dr. Robert Shulman, both of the Baylor College of Medicine, called the results "encouraging." However, future studies need to follow children for several years to examine whether there are any long-term consequences from using probiotics in infancy, they said.

The study and editorial are published in the Jan. 13 issue of the journal JAMA Pediatrics. It was funded by the Swedish company BioGaia AB, which makes probiotics. The company had no role in the design, analysis or interpretation of the study.