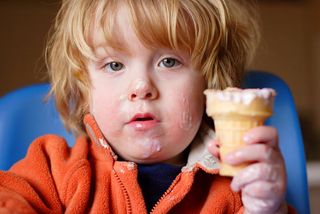 Sugar is toxic to the human body, and as such, should be regulated as strictly as alcohol, researchers now say.
(Image: © Suzanne Tucker | Shutterstock)

With food, taste is highly subjective.

From coffee pooped out by Southeast Asian cats to jellied chicken's blood, humans eat a wide variety of foods that many others would consider revolting.

But some people are pushing the definition of food group to a whole new level by trying to incorporate human waste and bacteria into the food chain. From infant poop sausage to belly button cheese, here are some of the most revolting "human foods" out there.

A 2013 exhibit called "Selfmade" at Dublin's Science Gallery showcases cheese cultured with bacteria from human tears, noses and belly buttons. Sophisticated smell analysis revealed that bacterial delicacies smelled a lot like their original owners' body odor. Unfortunately, exhibit visitors weren't allowed to take a nibble, but a wine and cheese pairing did allow the curious to get a good whiff of the novel cheese.

Though breast milk is thought to be the best food for babies, some foodies have been trying to expand the market for human milk beyond toddlers and the occasional curious partner. In 2010, a New York gallery allowed the curious to sample a bite of breast-milk cheese at a show called "The Lady Cheese Shop." Another London shop briefly sold breast-milk ice-cream pops until the health department confiscated the milky treats, and a New York chef also offered breast-milk cheese to his patrons.

Not content with stealing food from the mouths of babes, other scientists have wondered whether infant poop could have a role in making … sausages. In a 2013 study in the journal Food Microbiology, researchers speculated on the ability to harvest bacteria from infant poop, mostly Lactobacillus gasseri and Enterococcus faecalis, as the starter for fermenting sausages. The study researchers found that a few strains of Lactobacillus seemed to be best for jump-starting the fermentation process. No word yet on the food product's flavor though.

Many people have drunk urine throughout history for cultural reasons, with some alternative medicine practitioners claiming the substance's high mineral and nutrient content is beneficial. Army field guides say drinking urine is a good survival tool when stranded in the wilderness.

But some people want to go to extra lengths not to waste this human body fluid. In a 2011 post on the Wild Fermentation forum, user rawchickadee asks whether it's possible to harvest the nutrients and minerals in human pee as brine for fermentation. "I really do hope that it is possible. It's such a shame to see it go to waste," the user writes. Though one user cautions against it, another argues that it's fine to try and may even remove internal parasites. "Go ahead and experiment ... cause whether you stick with it or not it is a valuable skill for a survival situation where you don't have water," MDee wrote. Still, it's not clear if the user decided to go ahead with their idea. Though urine fresh from the source is generally sterile, pee left sitting out can contain harmful bacteria. And because urine is so high in salts and minerals, it could also lead to dehydration if drunk as a stand-alone beverage. [Video: Astronauts Drink Urine and Other Waste]

The trend of new moms eating their placenta after giving birth has been on the rise in certain segments of the U.S. population for years now. Many women have been freezing and turning their placenta into pill form to eat after they give birth. Eating the placenta, known as placentophagy, is common amongst some mammals such as goats, which eat the afterbirth for its nutritional boost. Practitioners believe eating the placenta can ward off postpartum depression, but doctors say there isn't any evidence so far that it's necessary in any well-nourished humans.

Though for many people, it's not exactly rare to eat some semen in the course of daily life, some people take eating this fluid to another level. In an informal 2011 experiment, BBC asked three women to do a taste test of partners' semen to see whether the foods they eat influence the flavor of sperm. (Two of the three women claimed they could distinguish differences.)

And the book "Natural Harvest: A Collection of Semen-Based Recipes" (CreateSpace Independent Publishing Platform, 2008), which has 43 — many tongue in cheek — reviews on Amazon.com, aims to change the fact that semen has been "neglected as a food." Another book, by the same author, Paul "Fotie" Photenhauer, aims to teach readers how to mix cocktails using the fluid. Of course, there's a good chance these books are mainly purchased as gag gifts.

For every weird food concoction that's knowingly consumed by humans, there are a slew of contaminated foods guaranteed to turn any stomach. From melamine-tainted milk to "avatar" pork laced with phosphorescent bacteria that glows blue, China has had its share of scary food products. (Apparently the glow-in-the-dark pork was safe to eat if well cooked). The United States isn't immune to food scares either: the process of rinsing ground beef in ammonia to remove potential bacteria caused also some indigestion when it was revealed.

But urban legends and news reports have also spread some food hoaxes over the years. For instance, in 2011 a story picked up by the Daily Mail, Discovery News and LiveScience from a YouTube video claimed that a scientist was making hamburger meat from proteins extracted from raw sewage. The poop burgers turned out to be a hoax.