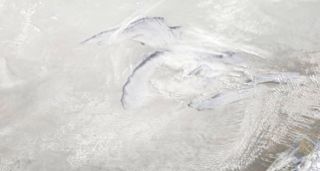 The five Great Lakes, in all their glory, barely peek out from the veil of clouds and whooshing snowfall above them in a new satellite image captured Monday (Jan. 6) as the Arctic's polar vortex barreled southward.

NOAA's GOES-East satellite snapped this Midwest "whiteout" of sorts at 3:15 p.m. EST (2015 UTC), before sunset, providing side illumination to the clouds and lake-effect snow, which forms when cold air moves over warmer lake waters. That warm water evaporates and heats up the lowest layer of air; since warm air is less dense than cold air, it rises and begins to cool. The result? The water vapor condenses into clouds and falls as snow, sometimes as huge amounts of snow in these "lake-effect" bands.

"The posted GOES image is a blend of the satellite-observed visible and thermal-infrared brightness of the scene, overlaid on a NASA-provided true-color historical-satellite image of the USA," Dennis Chesters of NASA's Goddard Space Flight Center in Greenbelt, Md., wrote in an email. (The infrared detectors on satellites measure the heat of the ground, clouds, water, etc., and can distinguish features of clouds (like height, which corresponds to temperature) that visible light can't. ) [Photos: The 8 Snowiest Places on Earth]

This resulting image shows an area that extends from the Minnesota-Canadian border in the upper left to the Chesapeake Bay, including the Great Lakes, where temperatures dipped to an average of minus 20 degrees Fahrenheit (minus 7 degrees Celsius) with a wind chill near minus 50 F (minus 45 C), according to NASA.

Much of the ground in the image appears as wisps of whiteness. Although there isn't a precise, technical definition of whiteout, Chesters told LiveScience, "the term does a fine job of describing the conditions around the Great Lakes on Monday, Jan. 6, when broadcast news reporters were showing horizontally blowing snow and limited visibility in urban and highway videos from Minnesota, Chicago and Ohio."

(Chesters added that clearly there is no whiteout at the surface in mid-Illinois where the ground can be seen fairly well. In Minnesota and Wisconsin, however, the surface appears featureless, suggesting limited visibility.)

The Arctic's air, the polar vortex, looks grey in the image. "The visible snowfields to the southwest of Lake Michigan show through the Arctic air there, which appears grey, the tone assigned to the low values of infrared emission normally indicating icy cloud tops," Chesters said.

In addition to providing viewers with stunning images of winter, these satellite observations also add to the science of meteorology. "The GOES satellite imagery helps meteorologists track lake-effect snow, which falls out of such low clouds as to be 'under the radar,'" Chesters said.

Editor's Note: This article was updated to reflect that temperature dipped to minus 20 F, not 20 F around the Great Lakes.